SHORT VERSION:
Eric, Matt, Dustin, and Sweet Lou make it out to Santa Monica for the Pro Jam contest and discover that they are preregistered and can therefore compete, and there, Eric finds Jamie – a skater girl he interacted with several times during the film – and talks to her, and she reveals that she was the one who put them on the list. They end up kissing.

Eric and company later confront the group of rival skaters they butted heads with throughout the film, and Eric and the group’s leader have an unofficial one-on-one contest in the vert ramp that Eric wins. The rival skaters praise him and his friends, but then the gang notices Jimmy Wilson’s tour bus leaving the grounds, and they think they escaped his notice once again.

Some time later, Eric, Matt, and Dustin are hanging out at the skate park back in Chicago when Jimmy Wilson’s tour bus suddenly appears near them, and he steps out with Jamie. Jimmy tells them that Jamie had him sit and watch a demo tape of them in action (which was left on the bus by Matt and Dustin when they snuck onto it at an earlier contest) and that he had noticed their skills in Santa Monica, so he was now inviting them to join him on tour. They accept and hop aboard the bus. A year later, Eric is shown to have become a skateboarding star.

LONG VERSION:
After Eric (Mike Vogel), Matt (Vince Vieluf), Dustin (Adam Brody), and Sweet Lou (Joey Kean) fail yet again to get the attention of Jimmy Wilson (Jason London) at a skating contest in Tucson and are now without food, money, or a mode of transportation, Matt decides to seek help from his estranged parents. It is when they get to his parents’ home that his hatred for clowns is revealed: His parents (Randy Quaid & Christine Estabrook) as well as his sister Denise (Lindsay Marie Felton) are clowns and their home is a clown college. His parents had tried to push him through clown college, but he didn’t want to go down that path in life, and they up and left him a few years prior to follow their dream of being circus clowns, and Denise went with them. Matt decides to take the opportunity to sit down with his parents and iron out their problems, and Sweet Lou finds himself falling in (mutual) love for the first time with Denise. The quartet stay the night and are given a truck so they can make it to the Pro Jam contest in Santa Monica.

The guys get there without trouble, and much to their surprise, they discover that they are preregistered and can therefore compete. They soon spot Jamie (Jennifer Morrison) – the skater girl Eric had several interactions with during their travels – skating in the opening ceremonies, and Eric later talks to her and finds out that she was the one who put their names on the list. Having already connected on a deeper level, Eric tells her that he really wants to get to know her and doesn’t care that she is a “chick skater”, and they kiss.

Eric and his friends start out with solid performances, but then they have a face-off with the group of rival skaters they’ve butted heads with throughout the film, and Eric and the group’s leader decide to have an unofficial one-on-one contest in the vert ramp. The contest quickly draws in many spectators, and Eric puts on an incredible showing that sees him emerge triumphant, garnering him much respect from the spectators and even the rival skaters. Unfortunately, he, his friends, and Jamie soon notice Jimmy Wilson’s tour bus departing the grounds, and they believe that they have escaped his notice once again.

Some time later, Eric, Matt, and Dustin are shown hanging out at the skate park back in Chicago. Eric mentions that he is working at his father’s hardware store now and that he has had only sporadic contact with Jamie since the Pro Jam due to her touring everywhere. It is also mentioned that Sweet Lou and Denise are officially a couple and he has joined her family’s circus. Suddenly, Jimmy Wilson’s tour bus parks nearby, and Jamie comes out with Jimmy. He tells the trio that Jamie had him sit down and watch a demo tape of the guys in action (which was left on his bus by Dustin when he and Matt snuck onto it back in Tucson) and brings up that he noticed their skating skills in Santa Monica, and he extends an offer for them to join him on tour. They promptly accept, and Eric kisses Jamie and then boards the bus with the others.

A year later, Eric – who is now a skateboarding star – stops into his favorite skate shop in Chicago to pick up a bunch of his own decks, and a couple of young kids – one of whom is trying to get a new deck to replace his thrashed one – recognize him. After the kid with the wrecked deck pays him a compliment, Eric autographs one of his decks and gives it to him for free before heading out (a gesture that the pro skater Chad [Bam Margera] didn’t do for him when he was in the kid’s situation at the same shop). 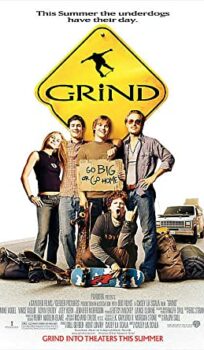