Deathproof
After killing Pam (Rose McGowan) in his “deathproof” car, Stuntman Mike (Kurt Russell) kills Julia (Sydney Tamia Poitier), Butterfly (Vanessa Ferlito), Shanna (Jordan Ladd), and their friend by crashing into their car, totaling his as well and putting him the hospital with a broken nose and collarbone. The Sheriff (same from Planet Terror) tells his son Earl (same guy) that the DA finds no way to exactly determine if it was murder or not since it was vehicular and there were no witnesses.

Later on, Mike begins to follow around Zoe, Abernathy, Lee, and Kim (Zoe Bell, Rosario Dawson, Mary Elizabeth Winstead, and Tracie Thoms) planning to take them out the same way. Zoe takes the girls out to a place in Austin, TX, where a man is selling a refurbished car exactly like the one used in the movie Vanishing Point, a favorite of Zoe’s since she is a stuntwoman (famous for Kill Bill). Before purchasing the car, Zoe entices Kim to do a driving stunt called “Ship’s Mast” in which the car is driven while a person lies on the hood, holding on to the car by ropes (or, in this case, belts) tied to the doors on either side. They manage to get Abernathy to bribe the owner of the car to let them take if for a test drive while he gets to know Lee. The three go on the road and do the death-defying stunt, at the height of which Mike rear-ends them and begins the most amazing chase sequence since the last Tom Cruise movie, with Zoe hanging on for dear life (for real) the whole time.

He eventually runs them off a road and into a ditch, where he gets out of his car to taunt them, when Kim unloads her revolver, hitting him once in the arm. Now scared, Mike makes a fast getaway in his car. As Kim and Abernathy begin to mourn their friend, Zoe pops up yelling those marvelous words, “I’M OKAY!!” and reveals she has only been injured on her behind, nothing more. The three then decide to take revenge on Mike. When they finally catch up to him, Zoe beats him with a long pipe she took, but that doesn’t do it, and Mike drives off with only his right arm able to steer. The girls follow him for another great chase sequence, now with the shoe on the other foot, as Mike is scared to death. Just when Mike feels he is safe, Kim causes his car to roll over, and the girls drag him out of the car for an old-fashioned roundhouse butt-kicking. And between where it says “The End” and the credits, Abernathy finishes the job on “deathproof” Stuntman Mike.

Planet Terror
The cure for the noxious gas poisoning is prolonged exposure to it, which is why the military guys want it so badly. In the movie, their leader Lt. Muldoon (Bruce Willis), is the man who tracked down Osama Bin Laden and killed him, which is why he felt he should live, but Wray and Abby (Freddy Rodriguez and Naveen Andrews) think differently.

After killing him, they rescue Dakota (Marley Shelton) and Cherry (Rose McGowan) after The Rapist (QT) attempts to have sex with Cherry while falling apart because of the infection, and they put him out of his misery. Wray then attaches Cherry with a new limb, incorporating firearms that she can shoot simply by thinking it (no trigger is ever physically pulled).

Outside, the survivors try to get to a helicopter while JT (Jeff Fahey) and his brother Sheriff Hague (Michael Biehn) blow up the military base containing the gas reserve. Abby explains that the survivors are the cure for the gas poisoning, because they can live on, uninfected, and start civilization anew. When looking around a corner though, Abby is killed (for the second time in the movie, as it was suggested in the beginning). Inside the helicopter, Dakota is confronted one last time by her infected husband Dr. Block (Josh Brolin), but he is killed. Cherry easily takes care of most of the soldiers but is almost shot by one, who Wray kills. However, while dying, the soldier shoots Wray several times, and Cherry attempts to get him onto the helicopter, to no avail as he dies.

Back in the helicopter, all the remaining survivors strap in as Earl (Michael Parks) makes his way to Cherry with the propeller at an angle, so he can slaughter some infected people on his way. Cherry grabs onto a rope that Dakota lowers to her, and the survivors make their way to Mexico, where, except for one infected, all is peaceful. Cherry takes care of the infected with her new Gatling gun leg attachment and her baby with Wray on her back.

And the trailers for Machete, Don’t Scream, Werewolf Women of the SS, and Thanksgiving are rather humorous. 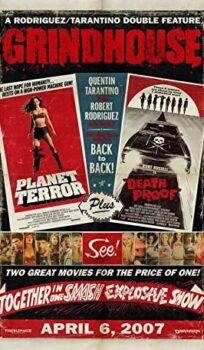