POOPER
Jack is able to push through his memories of the crash and is able to successfully land the damaged plane.

LONG VERSION
Jack Harris (Kiefer Sutherland) is an air-traffic controller in Chicago who is working when a flight he’s responsible for crashes, killing everyone on board.  Even though he was cleared of any wrongdoing, the guilt he continues to feel as a result of the crash causes him to quit his job.  Five years later, he has been designing air-traffic control software for video games.  One day, T.C. Bryant (Bruce McGill), a former co-worker of Jack’s in Chicago calls him.  He now works in Phoenix, where Jack lives, and he needs help.  It’s New Year’s Eve, and due to a staff shortage and with a powerful storm approaching, he wants to recruit Jack to work that night.  Reluctantly, Jack agrees.

Jack’s return to the control room is met with mixed emotions, once everyone else learns of his history.  The hot-shot controller Cruise (Robert Sean Leonard) doesn’t believe he belongs in a control center anymore, and even bets a co-worker he won’t last the night.  At first, Jack is able to do his job without difficulty, and he even helps rookie controller Julie (Kristy Swanson) out of a jam.  However, he begins to have flashbacks to the night of the crash, which causes concern amongst the rest of the controllers.  It’s gets so bad that he leaves the room, and wants to quit again.  But Julie talks to him about the love of the job, and Jack agrees to come back to work.

Just as Jack re-enters the room, the power to the entire control center goes out.  When the engineer on duty, John Quinn (Henry Winkler), is able to get partial power turned back on, he tells facilities manager Susan (Kelly McGillis) that the center will have computers but no AC.  If he can’t get the rest of the power turned back on soon, the server room will overheat and the computers will crash.  A short time later, the computers do crash, and Jack and the rest of the controllers are forced to handle the flights without radar.  With the storm approaching, they can only send a few flights to other airports, so the team has to coordinate the remaining flights using information written on a blackboard.  Once John is able to get the computers and radar to work again, the team scrambles to get the planes on the ground before they run out of fuel.

As Jack and most of the controllers are ready to celebrate New Years and head home, a flight declares an emergency.  An explosion has caused the plane to lose all electrical and hydraulic power.  As the situation unfolds, it quickly turns into an exact copy of the incident 5 years earlier with Jack.  But with 5 years to think about what happened then, he is able to convince Susan, T.C, and Cruise that with a series of turns using their thrusters, the plane can safely land at the airport instead of having to ditch in the middle of the Arizona desert.  With Jack figuring the math for fuel use and how long to thrust the engines, and Cruise and T.C. calling the numbers to the flight, they are able to get the plane pointed towards the airport.  As the pilots are able to get their electrical system back on, Jack’s flashbacks suddenly return, but he’s able to push through those memories and, as the movie ends, they are able to get the plane to safely land at the airport. 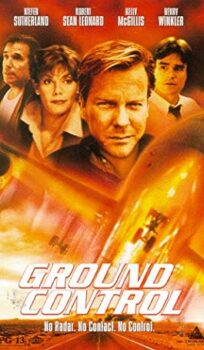