Dante is last seen having a meeting with Mike Tyson and Evander Holyfield in his office and trying to negotiate a third fight between them. Evander is not keen on doing it, so Dante tries to make some extra offers to get him to accept, and he only shows interest after Dante offers to get him a part in the fourth Hangover film. This infuriates Mike, and he walks up to Dante to give him a beating.

LONG VERSION:
As he trains for his “Grudgement Day” fight against Henry (Sylvester Stallone), Billy (Robert De Niro) builds a relationship with his biological son B.J. (Jon Bernthal) – who is training him – and his grandson Trey (Camden Gray). While hanging out with Trey one day, Billy gets a call from Dante (Kevin Hart), who tells him that “Grudgement Day” is upgrading from a 5,000-seat venue to an 18,000-seat venue because it sold too many seats, and HBO and pay-per-view are going to be airing the fight as well, so they and Henry will make a killing financially if people buy it. Excited by this news, Billy takes Trey to the bar he owns to celebrate rather than going to the movie theater-like they planned, and Billy gets to dancing with a groupie before agreeing to join her for a quickie while leaving the bartender, Joey (Barry Primus), to watch Trey. Sometime later, Trey wants to go home but can’t find Billy, and when he goes into Billy’s office, he spots Billy’s car keys as well as the case of beer that he has been using as a booster seat in the car. Trey puts the case on the driver’s seat and starts up the car, surprising Billy and the groupie since they were having sex in the back. The car coasts into the street, but Trey is able to put on the brakes before it hits a parked car. A police cruiser then suddenly appears, and both Billy and Trey are taken to the station, and B.J. shows up later on to collect Trey. He lambastes Billy for endangering his son before telling him to stay away from them both.

Meanwhile, Henry goes on a date with his old girlfriend Sally (Kim Basinger), and she tells him why she cheated on him with Billy all those years ago (and got impregnated with B.J. in the process): When he went up into the Catskill Mountains to train for his second fight with Billy, he just wanted to focus on training, and he never returned any calls she made and spent a year there instead of six months like he originally planned. Since she was very much in love with him and hated that he was away from her, she decided to fly up to his training camp one day to make a surprise visit, but she saw him hanging out with another woman when she got there. Henry informs her that this woman was just some stranger who showed up at the camp and nothing happened between them, but Sally said she assumed the worst and thus wanted to hurt him as much as she thought he hurt her, so she returned home and slept with Billy. Later on, while Henry and Sally are having dinner, Dante calls Henry and gives him the good news regarding the fight. However, while Henry is driving Sally back home sometime later, their good mood gets spoiled when he fails to notice an SUV driving up towards the passenger side of his car until it smashes into it. He and Sally are unharmed save for a cut Sally sustains on her head, but both go to the hospital to get looked at. After Sally has gotten treated, Louis (Alan Arkin) shows up to see how they are doing, and he soon talks to Henry alone, where he reveals that he figured out that Henry is blind in his right eye. He explains to Henry that he came to that conclusion after watching the earlier confrontation Henry and Billy had with Chael Sonnen (himself) at a UFC event they made a personal appearance at days earlier, which saw Chael hit Henry with a slap on the right side of his face that he should’ve easily saw coming (after which Henry hit Chael with a knockout punch). Henry thus confesses that he is indeed half-blind; a couple of years ago, an explosion that he got caught up in at his old job resulted in the retina getting detached and it never healed. Louis tells him that not only did this handicap of his cause him to put Sally at risk tonight, but if Billy finds out about it, he will take full advantage of it when they fight. Henry tells Louis that he needs to do this match, but Louis replies that they must call it off because it will put his health at serious risk. Having eavesdropped on the conversation, Sally talks to Henry and is able to convince him to pull out.

Louis visits Dante and tells him that Henry is not doing the fight without providing the reason why, much to Dante’s anger because he wanted it to happen so he could improve the reputation of his family’s name that his father had sullied (his father was a boxing promoter himself, albeit a crooked one). Dante relays this news to Billy, prompting Billy to go over to Henry’s house while Sally is visiting him and throw a rock through his front window to get his attention. Billy yells at Henry that he is not leaving until he agrees to fight him, and after seeing Sally, he asks Henry if he quit because of her. Henry and Sally go outside to face him, and Henry tells him that he needs to move on. Billy replies that it is easy for him to do that now that he has Sally back, but he, on the other hand, has nothing now. He asks Henry how he can live with himself knowing that they tied, and he tells Henry that he was only able to win their second fight because he (Billy) was not in peak condition. Sally tries to defend Henry against this claim, but Billy gets Henry to admit that he was indeed out of shape for that match. He then accuses Henry of backing out of this upcoming fight out of fear of getting knocked out, but Henry denounces this notion. Billy finally begs him to have this match with him because this is their last chance to finish this once and for all, and without explanation, Henry simply replies that it isn’t going to happen. He and Sally then walk back into the house while Billy just returns home.

After spending the whole night roaming around different places and thinking, Henry goes over to Sally’s house in the morning to speak with her. After making his introductions with B.J., he gets to talking with Sally privately and tells her that he is doing the fight. He explains that he made a lot of mistakes with his own life and with her and he doesn’t want to make any more of them, and he let Billy take away her and boxing, the two things that mattered the most to him. He admits that he doesn’t own a TV because he is afraid that he might accidentally come across a boxing match and be embarrassed because he is a fighter; he was born to be one, and he walked away so early. He tells Sally that he always loved her and always will, but he always regretted not beating Billy at his best. She replies that, no matter how hard he and Billy work in that ring, they won’t be at their best, but he replies that it’s the best they’ve got. She then gives him her blessing to fight, and off-screen, he lets Dante know that the fight is back on, and he in turn tells Billy. Some days later, Billy visits B.J. at the college he works at and tells him that he needs him in his corner, and he expresses how remorseful he is for having been an absentee father to him and a lousy grandfather to Trey. Before he leaves, he hands B.J. a jar of butterscotch jellybeans to give to Trey, then gifts him a scrapbook and says that he collected the contents of it over the years “just so he knows the whole story”. B.J. opens it and finds that Billy had kept pictures, newspaper articles, etc. of his accomplishments throughout his life, revealing that he was never far from Billy’s thoughts. On the night of the match, B.J. approaches Billy in his dressing room and helps him get ready, essentially forgiving him.

Henry and Billy give each other their all over the course of nine rounds, and Billy unknowingly exploits Henry’s bad eye, thinking that he is just a sucker for his left-handed punches. However, as the ninth round draws to a close, Sally informs B.J. about Henry’s handicap, and he in turn tells Billy about it during the rest period before the tenth and final round. Billy states that he is going to beat Henry and he doesn’t care that he is half-blind, but B.J. tells him that everyone is going to say that he didn’t beat Henry at his best if he keeps attacking that eye and he won’t be able to live with that. B.J. tells his father that he must do the right thing and stand in front of Henry where he can see him, but Billy seems determined to get the victory no matter what. However, after Billy sends Henry to the canvas following a barrage of left punches and then looks at B.J.’s disappointed face, he soon accepts that his son is right and helps Henry to his feet after asking and getting confirmation from him that he wants to keep going. He stays in front of Henry afterwards, and as the round nears its end, Henry puts Billy down on the mat himself, but Billy looks like he might not get up. After looking at B.J. and Trey and then at Sally, Henry decides to return the favor to Billy by picking him up so he can finish the fight standing. Seconds after doing so, the bell rings.

Henry and Billy hug, and when they go back to their respective corners, Billy gets praised by B.J. for doing the right thing, and as they hug, B.J. tells him he loves him. Sally comes into the ring and hugs and kisses Henry and lets him know that she is proud of him. It is then announced that Henry won the fight via a razor-thin split decision. Trey tells Billy that he is sorry that he lost, but B.J. assures him that he hasn’t lost anything, and Billy asks for Trey to call him “grandpa” before hugging him. Billy and Henry then meet in the center of the ring, and they essentially consider their unfinished business officially settled.

In a mid-credits scene taking place three months later, Henry, Dante, and Louis are sitting in front of a new TV at Henry’s house watching Billy perform on Dancing with the Stars. Henry soon gets annoyed at the sight of this and heads out to see Sally, and after the routine ends, Louis remarks to Dante that Billy is going to be having sex with his dance partner after the show. In another mid-credits scene, Dante is shown having a meeting with Mike Tyson (himself) and Evander Holyfield (himself) in his office and trying to negotiate a third fight between them. Mike is all for it, but Evander isn’t, so Dante tries to make some extra offers with Evander to get him to accept. When Dante offers to get him a part in the fourth Hangover movie and he shows interest in it, Mike gets angry at this and goes up to Dante to give him a beating. 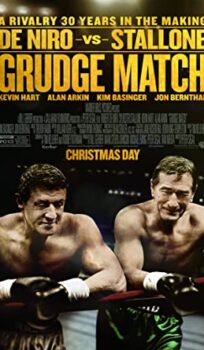