LONG VERSION:
The movie starts with the Guardians of the Galaxy Peter Quill/Star Lord (Chris Pratt), Gamora (Zoe Saldana), Drax (Dave Bautista), Rocket Raccoon (voiced by Bradley Cooper) and the baby version of Groot (voiced by Vin Diesel). They are protecting a bunch of energy batteries from an interdimensional being. They later collect their reward from their employers, the Sovereign race, which turns out to be Gamora’s adopted sister Nebula (Karen Gillan) whom they intend to deliver back to Xandar and claim the reward on her head. However, Rocket steals some of the batteries they were meant to protect, causing leader Ayesha (Elizabeth Debicki) to hire Peter’s former employer and Ravager leader Yondu Udonta (Michael Rooker) to capture them. However, Yondu himself has fallen on hard times, finding himself ostracized from the majority of the Ravager community by engaging in child trafficking with fellow captain Stakar Ogord (Sylvester Stallone) making a scene. A Sovereign fleet attacks the Guardian’s ship causing it to crash land on a barren forest planet where they are picked up by Ego (Kurt Russell) who is Peter’s father.

Ego takes Peter, Gamora, and Drax to his planet while Rocket and Baby Groot stay behind to fix the ship and guard Nebula. It turns out Ego is himself the planet (or rather, it’s core) he takes them to. He is a Celestial, a god-like being with incredible powers who used a human extension of himself to travel the galaxy and seek out other worlds. He tells Peter that he eventually reached Earth and fell in love with Peter’s mom Meredith (Laura Haddock) and was forced to leave her to avoid running out of energy. He later shows Peter how to access some of his dormant powers. Meanwhile, Ego’s pet empath Mantis (Pom Klementieff) forms an unlikely bond with Drax. The Ravagers catch up with Rocket and Groot, however, when it becomes clear Yondu still isn’t willing to turn Peter over one of his employees, Taserface (Chris Sullivan) leads a mutiny and takes control of the Ravagers. Yondu, Rocket, Groot are imprisoned while Nebula is set free and allowed to leave, with her plan being on defeating Gamora and eventually hunting down and killing Thanos (Josh Brolin, who doesn’t appear in this movie) for the numerous times he abused and mutilated her. The few Ravagers loyal to Yondu are flushed into space except Kraglin (Sean Gunn) who partially instigated the mutiny but didn’t expect it to go as far as it did.

As Peter and Ego bond, Gamora feels uneasy especially as Mantis is clearly desperate to reveal something but won’t say what. Gamora tries to persuade Peter to think rationally, but Peter won’t listen and this combined with Gamora’s obvious attraction to him and her unwillingness to express it estranges them. Gamora is then attacked by Nebula, who defeats but doesn’t kill her. She just wanted to prove she could win against her in a fight. As the two argue, they are both silenced when they find a cavern filled with bones and strike up an uneasy alliance. Baby Groot manages to free Rocket and Yondu with the help of Kraglin, and together they destroy the Ravager ship and escape. Just before Taserface dies, however, he tips off Ayesha as to where she can find the Guardians.

Ego reveals to Peter that when he traveled the galaxy, he found other worlds to be far more boring than he imagined. To remedy this, he planted seedlings that would transform into further extensions of himself allowing him to exist throughout the universe. However, he needed the help of a fellow Celestial as he hadn’t the power to do this alone so impregnated women from across the galaxy, having Yondu fetch the children to him only to find each one couldn’t harness the power… forcing him to kill them all. Also, Ego reveals that he truly loved Peter’s mom and infected her with the brain tumor that killed her to prevent himself from being tempted to remain with her. Finally seeing Ego for the maniac he is, Peter attempts to blast him to pieces only to find he isn’t killed that easily (since his human form is just an extension). Ego smashes Peter’s signature Walkman and Awesome Mix Vol. 2 cassette tape that his mom gave him before she died. Rocket, Baby Groot, Yondu, and Kraglin arrive in the nick of time and reunite with the other Guardians (Mantis having finally revealed to Drax the truth about Ego). Yondu meets up with Peter for the first time since the last movie, and it’s revealed that the real reason that Yondu didn’t deliver Peter to Ego as instructed was that he learned what happened to the other children that were taken to him. The group make a plan to save the galaxy from Ego by detonating a bomb at his core made up from a thermal device and the stolen Sovereign batteries. Meanwhile, Ego begins to overtake the galaxy as his seedlings erupt on countless planets, including Earth, consuming everything they touch.

As Peter does battle with Ego to keep him distracted, the other Guardians struggle to deliver the bomb to the core; a task made even harder when the Sovereign fleet arrives and tries to blast them to pieces. Eventually, after much difficulty, the fleet is destroyed, and Baby Groot recalls instructions correct for the first time in his life, and he sets the timer on the bomb. This destroys Ego (with Peter losing his Celestial powers), and as the planet breaks up Yondu sacrifices himself to save Peter, with the two realizing that despite everything Yondu was the closest that Peter ever had to a real father growing up, as Yondu apologizes for failing Peter’s brothers and sisters. Peter is devastated to lose the person who, despite frequent arguments, betrayals and threats helped him the most growing up and taught him to take care of himself.

A funeral is held for Yondu on the Guardians’ new ship, and the other Ravager factions turn up to give him a funeral led by Stakar who recognizes Yondu’s sacrifice. Peter passes on Yondu’s arrow to Kraglin who leaves (but not before giving Peter a Microsoft Zune, a gift Yondu was keeping, claiming that everyone on Earth would be using one by now). Meanwhile, Nebula also departs to hunt down and kill Thanos, but not before reaching a small form of reconciliation with Gamora. Mantis remains with the Guardians, while Gamora grows closer to Peter even if she still won’t acknowledge any romantic feelings she has.

There are five mid/post-credits scenes: 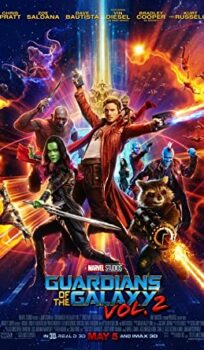