Ronan merges the Infinity Gem with his hammer and, with newfound unlimited power, decides to use it to kill Thanos after destroying the planet Xandar.

The Guardians and the Nova fleet confront Ronan, who makes very short work of the Nova ships with the Infinity power while the Guardians board Ronan’s ship.

After Gamora defeats her sister Nebula, Rocket crashes Quill/Starlord’s ship into Ronan’s ship, which crash lands on Xandar. Groot protected the other Guardians by growing himself into a ball of thick branches of around them. Ronan is still alive because of the power of the Infinity Gem in his possession, but Drax destroys Ronan’s hammer while Quill distracts him by dancing.

The five Guardians collectively use the Gem’s power to defeat Ronan once and for all. Quill tricks Yondu into taking a package that Yondu thinks holds the Gem.

The Guardians’ galactic criminal records are all expunged by Nova, and Quill finds out that his father was not of Earth. (Unbeknownst to him, Yondu and the Ravagers were supposed to deliver him to his father.) Quill leaves with the three remaining guardians and a twig that is slowly regrowing into Groot. As they depart the planet, Quill opens the last gift from his mother, an audio tape that is played into the credits.

After the credits, The Collector is seen being laughed at by Howard the Duck. 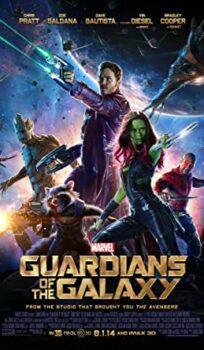