Joanna (Joey) Drayton shows up unexpectedly at her parents house in San Francisco.  The 23 year old has brought her future husband, John Prentice (Sidney Poitier) to meet her parents for the first time.  John is a successful doctor.  However, Joanna is white and John is black.  Joanna is sure that her liberal parents will not care, but John is not so sure.  When John is on the phone with his parents, Joanna impulsively invites John’s parents to dinner at her house that night also.  In addition to the race issues, John and Joanna have only known each other for 10 days, and John has just taken a job with the World Health Organization in Geneva, so they want to get married in a few days.

Joanna and John, both their parents, and Monsignor Ryan, a friend of the Drayton’s, are all there for dinner.  Monsignor Ryan is the only one who seems genuinely happy for the couple.  Both fathers are strongly opposed.  Both mothers are initially opposed, but come to support the couple.  The strongest opposition comes from Tillie, the black maid and cook who has been with the family for many years.  She is openly hostile to John, and accuses him of using Joanna for his own advancement.

The mothers manage to convince Mr Drayton (Spencer Tracy) to support the couple.  He gives a speech to the group.  At first, it seems like he is going to oppose them.  He tells them that they will have to deal with prejudice and malice, but that those people are wrong.  They can not rule their lives by the reaction of people who are wrong.  He will support them, and he promises to start by convincing John’s father to support them. 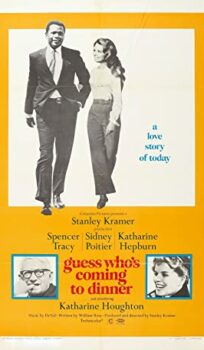