Set during fascist era Italy in World War I, Geppetto the woodcarver loses his son Carlo during a bombing. In his grief, he carves a wooden boy, which is brought to life by a Wood Sprite that names him Pinocchio. Sebastian J Cricket becomes a guide for Pinocchio when the Wood Sprite offers him one wish. Although people view Pinocchio as an abomination, Geppetto tries to make him into a model citizen.

While Pinocchio is meant to go to school, he is found by the greedy Count Volpe for his failing circus to be his new star attraction. Pinocchio joins but is found by Geppetto, and during an argument with Volpe, Pinocchio is hit by a truck and dies. However, since he is not technically a “real boy,” Death (sister of the Wood Sprite) is able to send Pinocchio back to life. He stays with Volpe to earn money for Geppetto, but Geppetto goes after Pinocchio with Sebastian, and they get eaten by a sea monster. Volpe, meanwhile, keeps all the money for himself, leading to his monkey Spazzatura to warn Pinocchio. After seeing Volpe for who he really is, Pinocchio humiliates him when he puts on a show for Mussolini and mocks the Prime Minister, leading to his second death.

Pinocchio is sent to a fascist soldier camp by the Podesta, along with his son Candlewick. Pinocchio befriends the boy after learning how his father just wants to mold him into a fascist soldier. The school is bombed, and the Podesta is killed, and Pinocchio is found by Volpe. He attempts to burn the puppet, but Spazzatura turns on Volpe and sends him falling off a cliff to his death. Pinocchio goes to rescue Spazzatura, but they get eaten by the sea monster. After reuniting with Geppetto and Sebastian, they escape the sea monster and blow it up with a sea mine, but Pinocchio wants to go back sooner to rescue Geppetto, even though Death warns him this will make him mortal and he will not return. Pinocchio goes back early and saves Geppetto but dies permanently. When the Wood Sprite reappears, Sebastian uses his wish for Pinocchio to come back to life.

Pinocchio spends many nice years with Geppetto, Sebastian, and Spazzatura before they all pass away, and he goes off on his own for a new adventure until the day he may reunite with them. 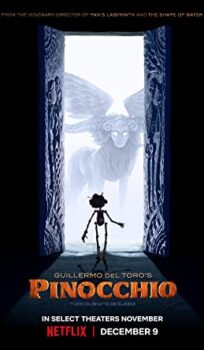