Guns of the Magnificent Seven(1969)

The third film in the Magnificent Seven series.

POOPER
Chris kills the colonel and Quintero is freed.  Of the seven, only Chris, Max, and Levi survive.  Max remains in Mexico to continue the fight against the dictator, and Chris and Levi return across the border without the money.

LONG VERSION
Quintero, the leader of the revolutionaries fighting against the dictator of Mexico, is captured by the corrupt Federales, along with many of his followers.  Before he is taken away, he gives his top lieutenant Maximiliano (Max) O’Leary (Reni Santori) his last $600 to use in the cause.  Max goes to the head of the rebels Lobato, who insists that the money be used to acquire guns and other weapons from across the border so they can bust Quintero out of the nearby prison.  However, Max instead seeks out famed gunslinger Chris Adams (George Kennedy), who is considered a folk hero in Mexico.  He finds Chris just as he is freeing Keno (Monte Markham), a man about to be hung by a corrupt judge for stealing a horse.  Max tells Chris his plight, and he and Keno agree to help.

Just like the first two films, Chris seeks out others to help the cause.  This time, he finds help in the form of Cassie (Bernie Casey in his movie debut), Slater (Joe Don Baker), Levi (James Westmore), and P.J. (Scott Thomas).  The seven ride across the border and soon come across a political prisoner transport led by Colonel Diego (Michael Ansara).  The colonel’s brutal treatment of the prisoners makes Chris and his men become less mercenary and more sympathetic to Max’s cause.  When the seven meet up with Lobato, he is angry at Max for bringing back six men instead of weapons and won’t join them in their planned attack of the prison.

Without Lobato’s men, the seven don’t have a chance against the nearly 50 heavily armed soldiers at the prison.  Chris then decides to attack another political prisoner transport, and recruits the freed prisoners so the seven can train them and help in the attack.  On the night before the raid, Max goes to Lobato to try to get him to reconsider and join the fight.  Again Lobato refuses, and Max calls him a coward before riding away.  The next morning, the seven and their recruits begin the assault of the prison.

During the climatic battle, the seven and the recruits are killing many of the soldiers, but many of them are dying as well.  Cassie, Slater, P.J., and Keno are all killed during the fight, but Chris was able to kill Colonel Diego, who earlier ordered the execution of Quintero.  Just as things look grim, the rebels (minus Lobato) suddenly appear and help win the battle and free Quintero.  After the battle, one of the rebels tells Chris that they chose to join the battle and killed Lobato for being a coward.

The movie ends with Max vowing to continue the fight against the dictator.  As Chris and Levi ride off back across the border, one of the rebels realizes that they forgot their money.  Max then says that they didn’t forget.. 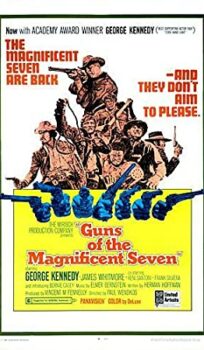