The California Atoms are a professional football team in L.A., owned by Hank Cooper (Ed Asner) and coached by Coach Venner (Don Knotts). They are by far the worst team in the league and have not won a game in years. Their cheerleaders are fat and ugly, and even the marching band is awful. Desperate to draw fans in somehow, Cooper wants a great half time show. His secretary Debbie sees a story in her parents Yugoslavian newspaper about Gus, a mule that can kick a soccer ball through the goal from anywhere on the field.

Gus belongs to Andy Petrovic. Andy’s older brother is a local soccer star, and their parents idolize the brother and are very critical of Andy since Andy is terrible at soccer. Gus and Andy are hired to come to L.A. Meanwhile, team owner Cooper owes a lot of money to gamblers Charles Gwynn (Harold Gould) and Cal Wilson (Dick Van Patten). He can not pay. They give him a last chance bet. If the Atoms win the Super Bowl, he owes them nothing, but if they do not win the Super Bowl, the gamblers get the team from him.

The Atoms are losing their first game, but Gus is a hit at halftime. In the 2nd half, Gus is put into the game to kick a field goal. Andy tells the other players to throw the ball to him and Gus will kick a touchdown. (An obvious reference to Garo Yepremian of the 1972 Super Bowl Dolphins who notoriously infuriated Larry Csonka by running off the field yelling “I kick touchdown”). The other team protests, and announcers Pepper (Bob Crane) and Johnny Unitas (as himself) are aghast. However, nowhere in the rule book does it say that players must be human, and the refs allow Gus to kick. With Gus making a field goal on each possession from anywhere in the field, the Atoms win. The Atoms go on to win their next few games thanks to Gus getting field goals every time, and are in first place in their divison. Gus will only kick when Andy holds the ball. Debbie has been assigned by her boss to watch over Andy and Gus, since she can speak his language, and there is an obvious romance budding between them. Gus is an intelligent mule, and it is clear he is trying to push them together.

The gamblers are getting upset about the team’s success. They hire incompetent criminals Crankcase (TIm Conway) and Spinner (Tom Bosley) to stop Gus. For the next game, Crankcase shows up with a horse trailer as a replacement driver, and gets Andy and Gus lost in the desert so they miss the game. The Atoms lose. Cooper knows the gamblers were behind this, so he hires security for Gus and Andy. After a few more victories, Spinner dresses up as a police official and goes to “review the security” around Gus. While no one is looking, he spikes Gus’s water pail with alcohol. A drunken Gus stumbles around the field and misses his kicks.

Still with only 2 loses, they make the playoffs. Andy is a celebrity and is on a TV show. His parents appear on the show from Yugoslavia. They are unimpressed since he just holds the ball for Gus to kick. The father keeps saying the older brother is the real star. Before the playoff game, Spinner and Crankcase call Andy and tell him that Debbie has been in a car accident and is seriously injured. He runs to the hospital, where they lock him up in an empty room. The Atoms are losing, with Gus refusing to kick for anyone but Andy. However, when Debbie dresses up in Andy’s uniform and asks Gus to kick for Andy, Gus does kick. The Atoms win with Debbie as holder, although everyone in the stands thinks it’s Andy. Andy is very upset since it is like his father said, that he is nothing, that anyone can hold the ball for Gus to kick.

When the Atoms reach the Super Bowl, Spinner and Crankcase steal Gus and lock him in a hotel room. They put on the start of the game. When Gus sees the Super Bowl starting on TV, he goes wild and kicks down the door to escape. As he makes a run for it, Cooper and Andy are in a helicopter searching for Gus. They see him and airlift him to the Super Bowl by halftime.

Gus makes several field goals. With seconds left on the clock, the Atoms are down 12 to 14, with the ball on their own 5 yard line. It will come down to this last field goal attempt. Gus slips in the mud and misses the ball. There is a scramble for the ball, and Gus kicks it to Andy standing off on the side. Andy runs 95 yards for the touchdown and win. After the game, the team owner tells Gus, that’s okay, everyone misses once. Debbie winks at Gus and says, I know you did that on purpose. Gus winks back at her. 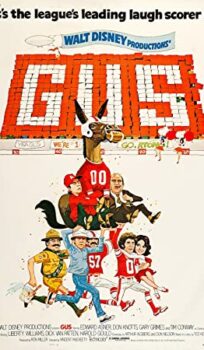