A schoolboy’s assignment is to tell about his hero, so he chooses his grandfather’s dog and tells this story:

Parker Wilson (Richard Gere), his wife Cate (Joan Allen) and their grown daughter Andrea are quietly living upper-middle class lives. A university fine arts professor, Parker is taking the train home from work one day when a crate with an Akita puppy from the far East arrives with most of the crate’s label missing. The station master (Jason Alexander) is at a loss as to its intended destination, and Parker is smitten with the puppy.

Parker takes him home where his wife is adamant that he find a new home for the puppy; of course she eventually sees that the two are destined for each other. An Asian friend reads the symbol on the collar and explains that “Hachi” is the number 8, which is lucky. Having now adopted one another, Parker and Hachi enjoy a special bond.

Hachi discerns that the daily train whistle at 5:00pm means his master is arriving at the station, so he runs to the station and greets Parker to walk home with him. Local vendors and the station master marvel at this and slip Hachi food & love while he awaits Parker’s arrival every workday.

A few years later, Parker dies suddenly. Cate moves away and Hachi is given to Andrea, now married with a baby. The grieving dog immediately runs away back to his old home, now sold to a new family, so Hachi returns to the train station to await his friend. The regulars there know why he has come, so they look after him as he waits, day after day, for ten years. After many years, Parker’s widow Cate returns to town for a visit and getting off the train herself, sees Hachi still faithfully at his post and lovingly offers to sit with him til the next train. 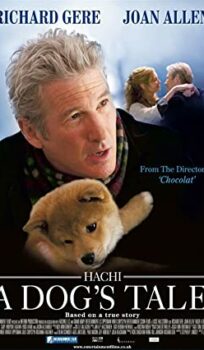