SHORT VERSION:
From a set of payphones in the lower levels of Grand Central Station, Dade, Kate, Paul, Joey, and Emmanuel – with some assistance from Hack The Planet hosts Razor and Blade and many hackers from around the world – succeed in downloading Belford’s money-stealing worm program from the garbage file of Ellingson Mineral’s supercomputer, the Gibson, onto a floppy disk, and then they crash the Gibson in order to kill the Da Vinci Virus and save the company’s oil tankers (Belford created the virus as a cover so he and his accomplice Margo could erase the worm’s tracks and escape with the money).

The Secret Service – led by Agent Gill – then arrests the first four hackers (Emmanuel had been sent to fix some other payphones to buy them more time to complete their task before they got arrested), but Dade surreptitiously tosses the disk into a nearby trash can and yells out hints to Emmanuel – who is hiding in the crowd – that the disk is there and that he must get the info aired on Hack The Planet. Emmanuel finds the disk and gets it to Razor and Blade, who proceed to jam all TV signals in the city and put him on the air, and he publicly exposes Belford, Margo, and their scheme. The antagonists are arrested, and Dade and his friends are allowed to go free. Dade and Kate begin dating.

LONG VERSION:
After Joey (Jesse Bradford) and Ramon (Renoly Santiago) get arrested over the contents of the disk, Kate (Angelina Jolie) and Emmanuel (Matthew Lillard) go to Dade (Jonny Lee Miller) and ask for his help. Thinking about his criminal record, he refuses, but he does agree to make a copy of the disk for Kate. Later that night, Belford (Fisher Stevens) calls Dade and tells him to hand over the disk or else he will create a false criminal record of his mother and have her imprisoned. Dade meets Belford at a random location and gives him the disk.

Dade then meets up with Kate, Emmanuel, and Paul (Laurence Mason), and together they work to figure out the contents of the disk on the copy Dade gave them. They eventually figure out that a worm has infected Ellingson Mineral’s supercomputer – the Gibson – and has been stealing money from the company via “salami slicing” (taking small, unnoticeable increments from company transactions). The worm will be ending its run in two days, and it has already eaten up $21.8 million. Kate realizes that someone must be setting them up to take the fall for this crime, so they got to get the rest of the file and figure out where the money is going before the worm disappears so they can find out who created it. Dade tells them about Belford and how he must be the one who wrote it, and admits to handing over the original disk to him because he had found out about his past as Zero Cool. He then tells them that he’s going to directly hack the Gibson to retrieve everything on the worm, and they all offer to help, knowing that together, they can get the information in just enough time before the authorities will be able to arrest them.

Dade and Kate rummage through the company’s dumpster for employee memos with passwords, Emmanuel – posing as a telephone repairman – installs a phone tap in the company’s office, and Paul poses as a delivery boy and walks around the company’s cubicles and uses his eidetic memory to memorize employees’ passwords as they enter them. Meanwhile, Belford calls Agent Gill (Wendell Pierce) of the Secret Service and tells him that the virus will be going into effect at 10:30 a.m. tomorrow morning, and Dade and his pals tried to hack the Gibson again, so the Secret Service better take more strenuous action to arrest them or else Ellingson Mineral will hold them responsible for their losses. Gill procures arrest warrants for each of the hackers, and says that the arrest will occur at 9:00. Emmanuel and Paul overhear this on the phone tap and alert Kate to what Gill has in store for them. Later, they all meet on a subway and learn of the Da Vinci Virus and what it will do, and they realize that it will act as a cover for Belford’s worm and that they will all be blamed for its launch (Belford had earlier lied to Agent Gill by saying that Joey had downloaded the code to the virus, and he needed him to retrieve that code so he could destroy it). Kate decides to seek the aid of Hack The Planet hosts Razor (Darren Lee) and Blade (Peter Y. Kim), with Dade tagging along.

They meet up with the duo and tell them all about their upcoming dilemma and that they need their help. They agree to assist them, but advise them to seek extra help to carry out their plan, and suggest sending out a distress signal to hackers around the world requesting assistance. The next morning, Dade and his pals evade the Secret Service and converge on one of the lower levels of Grand Central Station to do their hacking, meeting up with Joey along the way.

After Emmanuel is sent off to fix some payphones to buy them some more time, the others get to work from another set of payphones. They launch their own viruses into the Gibson as a means of distracting Belford so they can find and download the worm onto a floppy disk, but Belford easily negates their attacks, and he figures out where they are and calls up Gill to let him know. He then calls Dade and warns him to back off now or else be slapped with a prison sentence, but just then, Razor, Blade, and hackers from around the world hack into the Gibson and infect it with dozens of viruses. Joey downloads the worm, and the other hackers crash the Gibson, which kills the virus before any of the tankers can capsize. Moments later, Gill and the Secret Service arrest Dade and company.

While being taken away, Dade surreptitiously tosses the disk into a nearby trashcan. As they are being put into squad cars, Dade shouts out hints to Emmanuel – who is hiding in the crowd – that the disk is in the trash, and he must get the information aired on Hack The Planet. Emmanuel retrieves the disk, and then he heads to Razor and Blade. The duo proceeds to jam all TV signals in the city and put Emmanuel on the air, and he publicly exposes Belford and his accomplice Margo (Lorraine Bracco) and their scheme. Belford quickly abandons Margo, who is arrested a short time later, but Belford ends up getting arrested by Gill personally while attempting to flee to Tokyo under a new look and alias.

Some time later, Dade and Kate – who have been cleared of all charges along with their friends – go on a date, and Kate even wears a dress. As they swim in a rooftop pool, Dade directs Kate’s attention to some adjacent office buildings, where it is shown that he has hacked into their lighting systems and made the lights spell out “Crash and Burn,” after their hacker aliases (Crash Override and Acid Burn). They then start making out. 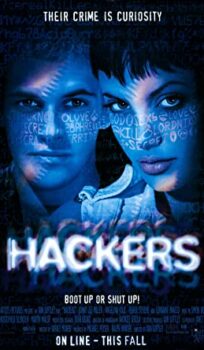