Mary Jane (Rachel True) finds out Thurgood (Dave Chappelle) smokes and sells weed, and dumps him, but Thurgood tells her some time later that he loves her and he promises that he’ll get clean for her. Kenny (Harland Williams) calls up Thurgood, Scarface (Guillermo Diaz) & Brian (Jim Breuer) and informs them that his prison friend & protector Squirrel Master (Tommy Chong) was going to be released in 11 days, and after his release, Nasty Nate (Rick Demas) would be able to freely have his way sexually with him. The trio decides to rob the pharmaceutical lab Thurgood works at to steal a huge supply of weed to sell to make Kenny’s bail and get him out before he got violated, but the cops bust them. To get out of trouble, they agree to a deal with two detectives to participate in a sting operation to bring down weed dealer Samson Simpson (Clarence Williams III), whom they made enemies with since they robbed him of some of his clientele.

The sting goes according to plan, but when the boys say the code word “Abracadabra” to get the detectives to come in and make the arrest, the detectives have already smoked a lot of weed and are too high to take action. Samson figures out that Thurgood is wearing a wire, and a fight ensues between the trio and Samson’s henchwomen. The trio quickly dispatches of them, but Samson pulls a gun on Scarface and threatens to kill him. Brian then throws his bag of Jerry Garcia dust on the floor, which causes Jerry Garcia to appear and knock Samson out with his guitar. The cops, along with the two high detectives, come in and arrest Samson.

In a voiceover, Thurgood says that the cops took all the credit for busting Samson, but the trio cut a deal with them to get their friend Kenny freed from prison. Thurgood then meets with Mary Jane at the Brooklyn Bridge, telling her he was done with weed and that he brought his last joint with him for her to see him throw it into the East River. Despite a last temptation, he tosses the joint, and he and Mary Jane kiss and walk off together. In the last voiceover, he reminds the audience that he loves weed, but not as much as he loves women. 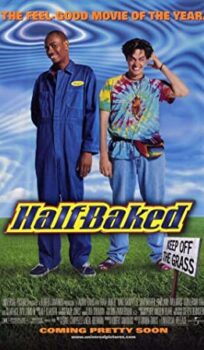