POOPER:
Dr. Loomis (Donald Pleasence) saves Laurie (Jamie Lee Curtis) from Michael Myers (Tony Moran) by shooting him, causing him to fall out of the window, and apparently to his death. As Loomis consoles Laurie, he notices that Meyers’ body is missing.

Long Ending:
The movie begins with the viewer watching events from a character’s first-person POV through two eye-holes in a mask so that it looks like the viewer is actually in the movie. We see that the character is holding a knife and sneaking into a teen girl’s room who is preparing for Halloween night and in her sexy lingerie. She looks at the viewer and says “Michael” and asks angrily what he is doing in her room? Michael responds by stabbing her many times. The police are soon alerted and the movie switches to a traditional POV, where they find a young (10 or 11 years old) Michael Myers in a clown costume with a big bloody butcher knife on his front lawn in the town of Haddonfield. The victim had been his older sister, Judith.

We flash forward exactly a day before Halloween 15 years later to discover that  Myers (Nick Castle/Tony Moran) AKA “the Shape,” has spent the remaining time incarcerated in an asylum. He has also grown into a hulking beast of a man. He has been under the care of Dr. Samuel Loomis (Donal Pleasance), who believes that Myers is the living embodiment of evil. It is a dark and stormy night, and they are preparing to transport Myers to another facility when he escapes by commandeering the ambulance from the overmatched sanitorium staff.

We go back to Haddonfield and meet teenager Laurie Strode (Jamie Lee-Curtis), a virginal but horny girl. She is friends with Annie Bracket (the sheriff’s daughter) and Lynda Van der Klok (P.J. Soles), both of whom are a bit more advanced than Laurie when it comes to boys. Laurie stops by the old Myers home to drop something off, unknowing that the white-masked Myers has returned and is watching her from inside. Throughout the rest of the day, Laurie keeps seeing Myers stalking her out of the corner of her eye. Meanwhile, Dr. Loomis has followed Myers to Haddonfield and is trying to get the police to help search for him before Halloween night descends. He also discovers that Judith’s tombstone has been abducted from its grave. We also learn that Laurie and Annie have babysitting plans that night, though Annie and Lynda both hope to party later with their boyfriends and find a guy for Laurie too.

Night falls. Laurie, like a good girl, goes to babysit 10-year old Tommy Doyle. Annie is across the street babysitting a young girl named Lindsey, but brings her over to Laurie and Tommy so she can go pick up her boyfriend Paul. Myers kills Annie in her car before she ever leaves the house. Tommy sees Myers “the boogeyman” carrying Annie’s body from the garage into the house, but Laurie dismisses his claim as his imagination, though she pays closer attention to the house. Lynda and her boyfriend Bob arrive at the house where Annie was killed to party with her, but when they don’t find anyone there, they have sex. This leads them both to being killed by Myers. Laurie finally walks across the street to check on her friends, only to find Annie’s body laid out on the bed under Judith’s tombstone as well as the corpses of Lynda and Bob throughout the house.

Myers chases Laurie who manages to escape and run back across the street. Despite stabbing Myers with knitting needles, he is undeterred and she and the two kids continue to hide from him. Laurie eventually distracts Myers while Tommy and Lindsey flea screaming from the house, attracting the notice of Dr. Loomis and Sheriff Bracket who head towards the house. Meanwhile, Myers has found Laurie hiding in a closet, dragged her out and prepares to kill her, but she buys time by ripping off his mask. Myers replaces his mask, but before Myers can strike, he is shot multiple times by Dr. Loomis and falls out the upper bedroom window as the sheriff stands there mouth agape. Laurie is crying inconsolably on the floor. When Dr. Loomis goes to the window, he sees that Myers must have miraculously survived the shots and the fall, as his body is nowhere to be found. 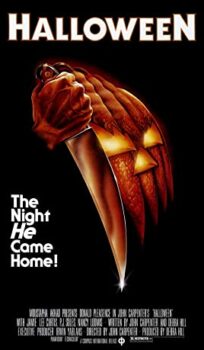