POOPER: (Thanks Rich)
Michael Myers dies at the hands of Laurie Strode (Jamie Lee Curtis) and Allyson (Andi Matichak) but doesn’t transfer his evil to them. The townsfolk then chop up Michael in the trash compactor.
Corey (Rohan Campbell), who had some of Michael’s evil essence to commit murders, dies at the hands of Michael. His murders are blamed on Michael even though Laurie and Allyson know the truth.
Allyson then leaves town to begin her life.
Don’t Fear the Reaper is played over the end credits.

LONGER VERSION:
Four years after Michael Myers’ last massacre in the town of Haddonfield, he has seemingly vanished. Laurie Strode now lives with Allyson, but they continue to be associated with Michael, and other residents blame Laurie for “tempting” Michael into killing again. Allyson begins a relationship with Corey Cunningham, who accidentally killed a boy that he was babysitting and became known as a “psycho babysitter”. Despite his attempts to shake that view of him, Corey succumbs to his evil nature after Michael finds him but spares his life.

Corey goes on a killing spree, taking out some teens that mocked him, a crude radio DJ, a homeless man, Allyson’s boss and co-worker, and even his own mother. Despite Laurie’s warnings about Corey, claiming she saw Michael in his eyes, Allyson ignores her and plans to leave town with him. Laurie pretends to commit suicide when she realizes Corey is going for her. Still, Corey sticks a knife in his throat to make Laurie look like she killed him, which Allyson initially believes until the police call her after Laurie reported a suicide attempt. Michael makes his return and kills Corey before entering his final showdown with Laurie. They fight until Laurie pins Michael to her kitchen counter and slits his throat and wrists with Allyson’s help. The entire town gathers as Laurie and Allyson bring Michael’s body to a junkyard and dispose of his corpse in a compactor, ensuring he will finally be gone for good.

Allyson reconciles with Laurie and moves out of Haddonfield. Laurie finally begins to move on and pursue a relationship with Officer Hawkins, but she keeps Michael’s mask in her house. 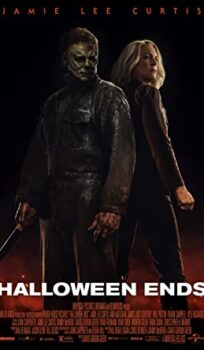