Halloween III: Season of the Witch(1982)

Submitted by Steve C (Pooper) and Evan B (Long)

Pooper:
Dan (Tom Atkins) manages to kill Conal Cochran (Dan O’Herlihy) at Silver Shamrock headquarters, he then drives to a phone to try to get the local television station to stop airing the commercial with the signal that activates the chip inside the mask. He is successful getting the commercial off one station, but Conal bought airtime on all the stations, so that his plan would go off without a hitch. As the film fades to black, we find a shocked Dan standing by two kids who are wearing their Silver Shamrock as the commercial plays on the TV.

Long Ending:
A man named Harry Grimbridge flees a small town owned by Conal Cochran (Dan O’Herlihy), the owner of a giant Halloween mask corporation called Silver Shamrock. He is pursued by mysterious individuals in suits who almost kill him at several points. Harry manages to make it to a gas station, and the attendant drives him to a local hospital. There, he is treated by Dr. Daniel Challis (Tom Atkins). Later, an individual in a suit sneaks into the hospital and kills Harry before lighting “himself” on fire.

Challis is recently divorced and spends more time womanizing than providing for his kids. He does, however, buy his kids trendy Halloween masks sold by Silver Shamrock. The Silver Shamrock corporation has launched a nationwide marketing campaign for its masks. The campaign will culminate with a horror film festival and a giant prize giveaway (the original Halloween film is shown as part of the film festival).

Harry’s daughter Ellie (Stacey Nelkin) finds Challis and convinces him to help her investigate her father’s death. Eventually, they find out that he was last seen in the town where Silver Shamrock is headquartered. They venture to the town under the auspices of locating a missing order for Henry. They meet other sellers of the masks, including the Kupfer family and a lady named Marge. The pair also notice that the town is full of security cameras and men in suits patrolling the streets. Their investigation is aided by a colleague of Challis’ named Teddy, who works in the same hospital. Ellie and Challis also start a romantic relationship.

While fooling around with a Silver Shamrock medallion embedded in a Halloween mask, Marge accidentally activates a laser therein that kills her. The heroes and the Kupfer family tour the Silver Shamrock factory and meet Conal Cochran. On the tour, Ellie sees that they have her father’s car in a hidden garage. The pair decide to leave and warn the authorities, but they are captured by men in suits. During the struggle, Challis kills one of the men only to reveal that the “men” are super-strong androids that do Cochran’s bidding.

Cochran puts Ellie in a separate room and begins explaining his plans to Challis. He wishes to restore Halloween to the supernatural night it used to be where children were sacrificed to appease the gods of darkness. To do so, he acquired a pillar from Stonehenge and harnessed the pillar’s dark powers. He puts a piece of the Stonehenge pillar into each Silver Shamrock medallion embedded in the Halloween masks. Cochran tricks the Kupfer family into being a guinea pig for his plan. When a Silver Shamrock commercial airs on TV, it activates the Silver Shamrock medallion in the mask and causes the Kupfer’s son’s face to melt (the son was wearing the mask). Poisonous insects and snakes emerge from the boy’s corpse and kill his parents. Cochran intends to end the Silver Shamrock horror film festival with the commercial activating the masks, causing widespread death throughout the country.

Challis manages to escape and rescue Ellie. The pair eventually find a box of Silver Shamrock medallions and play the commercial to activate them. Challis throws the medallions at the androids, and they explode. Cochran realizes that he is standing between the medallions and the pillar and congratulates Challis on his efforts before a beam emerges that vaporizes him. Ellie is then revealed to be an android (it is unclear if she always was an android or was replaced with one after being captured) and tries to kill Challis. He manages to barely fight her off before fleeing the factory.

Challis arrives at the gas station that Harry was found at in the beginning of the film and calls the TV stations. He frantically begs them to cancel the Silver Shamrock commercial. The film ends with several children watching TV while wearing the masks. Although two channels cancel the ad, a third airs it. Challis helplessly screams “no” as the medallions across the country are activated. 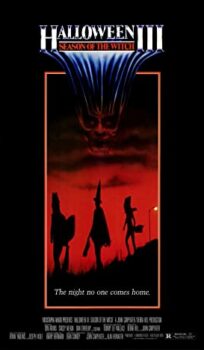