The stress of what Laurie faced has hardened her and made her paranoid and cynical, which has put a strain on her family, especially with her daughter Karen (Judy Greer).

Michael makes his way into Haddonfield on Halloween night and goes on a new, more violent killing spree. The escape was orchestrated by Dr. Ranbir Sartain (Haluk Bilginer), Michael’s new doctor after Loomis dies. Sartain wanted Michael to face the one victim of his that got away. Michael isn’t so thankful as he crushes Sartain’s head under his foot. He proceeds to go after Laurie’s granddaughter Allyson (Andi Matichak).

Michael finds Laurie’s home, which is set up with maximum security designed to keep Michael out, but the villain finds his way inside as he and Laurie have their showdown. Karen lures Michael to the bunker where she and Allyson are hiding. Karen shoots Michael, and they trap him in there as Laurie sets the house on fire with Michael inside. The women escape, but it looks as though Allyson will go through the same trauma Laurie faced. 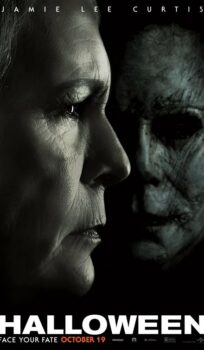