HALLOWEENTOWN (1998):
Marnie, Gwen, Aggie, Sophie and Dylan all combine their magical powers to destroy Kalabar and save Halloweentown. Luke turns out to be a goblin and Aggie decides to come live with the Piper family in the real world to teach the kids magic.

HALLOWEENTOWN 2: KALABAR’S REVENGE (2001):
Kal is the son of Kalabar and uses a spell to reverse the roles of Halloweentown and the real world, making Halloweentown normal and boring and transforming humans into the monsters they are dressed as for Halloween. Marnie figures out that saying the spell in reverse undoes the effects and uses this to stop Kal’s plan. Kal mysteriously vanishes, leaving his fate in the air.

HALLOWEENTOWN HIGH (2004):
Ethan Dalloway, his father and Principal Flanagan are all part of a scheme to seal the portal between worlds forever and steal the Cromwell magic, but Ethan turns on his father after Mr. Dalloway imprisons Cassie.

Dalloway and Flanagan cast a spell at the Halloween carnival to cause chaos and frame Marnie for it to turn everyone against her, but the magical students reveal their true forms and everyone accepts them for who they are. Marnie broadcasts this to the Halloweentown council to prove that mankind will accept magic and they agree with her, imprison Dalloway, free Cassie and permanently open the portal between worlds. Flanagan changes his ways, Dylan and Natalie agree to be just friends and Marnie kisses Cody.

RETURN TO HALLOWEENTOWN (2006):
Silas Sinister transforms Dylan into a dog and threatens to make the spell permanent unless Marnie uses the Gift- a mind controlling amulet- to take control of Halloweentown. Marnie agrees on the condition he turns Dylan back to a human, which he does, but Marnie uses the Gift’s powers to command Aneesa to suck the amulet into her genie lamp and then orders Gwen and Dylan to destroy the lamp. Silas is arrested and his daughters are stripped of their magic. Marnie forgives Ethan after he reveals that he renounced his magic after his father was arrested. Dylan finds out that Marnie did not destroy the Gift, but hid it in one of his textbooks and Dylan simply says, “Oh boy!” 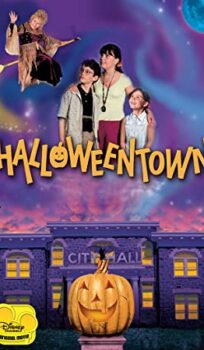