Hanna (Saoirse Ronan) is the last surviving child of a genetic super soldier project sanctioned then terminated by Marissa (Cate Blanchett), a high ranking CIA agent. Erik Heller (Eric Bana) was the CIA operative that recruited Hanna’s mother Johanna then attempted to protect them both when Marissa killed all the test subjects. However, Marissa caught up to them and murdered Johanna. Erik is not her biological father, but took Hanna in regardless as his own.

Hanna learns the truth about her past, just as Issacs (Tom Hollander) finds them both. Erik tells Hanna to run and proves his devotion and love for Hanna by sacrificing himself in order to kill Issacs; Erik is gunned down by Marissa soon after.

Marissa confronts Hanna with an pretense of friendliness but Hanna says she’s done being a killer. Marissa tries to kill her, but Hanna wounds her with an arrow in the process. They fight some more, culminating with Hanna executing Marissa. 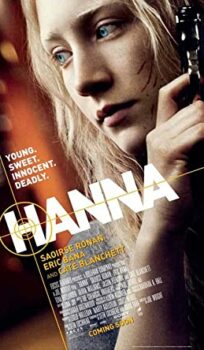