Hannah (Mia Farrow) has two sisters, Lee (Barbara Hershey) and Holly (Dianne Wiest), and the three are very close.  She used to be married to Mickey, who was told he couldn’t have children.  They turned to his business partner for a sperm donation and had children, after which the marriage failed, but they remained friends.  Hannah set him up on a date with her sister Holly but it went badly.

Hannah’s current husband Elliot (Michael Caine) falls in love with Lee.  The two begin an affair planning to leave their spouses and be together.  Lee leaves her boyfriend and enrolls at Columbia, but Elliot can’t bring himself to leave Hannah.  Lee ends the affair when she begins dating her literature professor, whom she later marries.  Elliot ends up accepting that he loves Hannah more than he realized and stays married to her, with Hannah never learning about the affair.

Mickey (Woody Allen) is a hypochrondriac who has a crisis when he’s told he may have a brain tumour.  After being given a clean bill of health he questions the meaning of life, quitting his job as a television producer and exploring different religions.  Holly is a failed actress who turns to writing scripts, and after running into Mickey in a record store asks to show him a script she’s just written.  He likes it and the two rekindle their relationship.  They marry and the film ends with Holly telling Mickey that she’s pregnant. 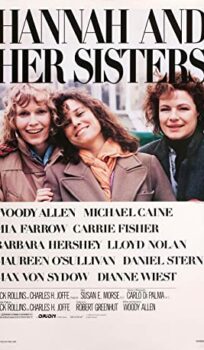