Hannibal (Gaspard Ulliel) hunts down and kills, one by one, each of the men who killed and devoured his sister, Mischa, back when they were children.  He does so in diverse gruesome ways.  However, most of them kept a common factor: he beheaded them and skewed their cheeks.

This calls the attention of an Inspector Popil (Dominic West).  He realizes Hannibal is responsible for the murders, but cannot really prove it.  Nonetheless, he warns Hannibal that he will be brought down to Justice if he doesn’t let the Police do their job.

The leader of the group, Grutas (Rhys Ifans), kidnaps Lady Murasaki (Gong Li), Hannibal’s aunt-in-law (and potential love interest), coercing Hannibal to surrender.  Eventually, they meet.  Grutas shoots Hannibal, but then he reacts and slices Grutas’s tendons with the Samurai sword -which has been broken by the bullet-, and then carves the M of Mischa over Gruta’s chest, which makes Murasaki run off, disgusted.  At this point, Grutas tells him that he also had to do with his sister’s murder, since he had a ration of the broth they prepared off the little girl.  This makes Hannibal snap, and then he climbs on Grutas and eats his cheeks off his face.

Popil, commanding a group of agents, comes looking for Hannibal -who has escaped- and rescues Murasaki.  Hannibal goes to Canada, where he meets Grentz (Ivan Marevich), the last remaining member of the group, and tells him: “Hello, Mr. Grentz.  I have come to collect a head”.

Before the credits roll, we see a shot of a car driving away into the woods. 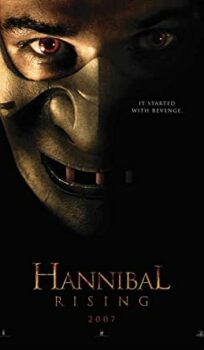