Happy Birthday to Me

Virginia (Melissa Sue Anderson) is not the killer, even though she finally remembers that her murdered friends abandoned her birthday party several years prior. That indirectly caused her mother to drown in a car wreck and Virginia to be subjected to experiments by a mad brain doctor. The killer is Ann (Tracey Bergman), who put on a mask designed by Alfred to double as Virginia. Mr. Wainwright (Lawrence Dane) had an affair with Ann’s mother and conceived her just before he left them. She kills him, and then comes after Virginia to try and make it look like suicide. She almost kills Virginia, but Virginia turns the knife against her and stabs her. Just then, the police captain comes and catches Virginia with the bloody knife and many bodies. (Oops!) 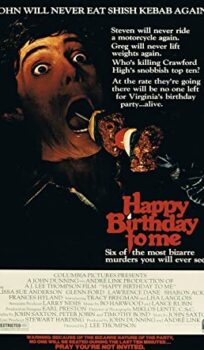