Mumble’s treacherous journey to find and talk with the “aliens” (humans) responsible for the decimation of the Antartic animals’ food supply of fish becomes a solo one as he crosses the ocean, ultimately beaching himself on an unknown shore near a city.

He is found and placed in a zoo with other penguins and realizes he cannot verbally communicate with the humans who come to watch him.  Months pass and he loses hope, until he is inspired by a little girl’s tapping on the window of his artificial habitat to dance for them.  His dancing ability quickly becomes a cause celebre and he is returned to his home in the wild for observation.

He tells the other penguins to dance along with him, so they can send a message to the humans.  While everyone is at first scared by the human researchers’ arrival, Mumble and his repentant dad Memphis (who had, years ago, done a bit of dancing himself) lead them all in a joyous dance.

The phenomenon of the dancing penguins eventually convinces the humans to stop the Antartic  fishing, and Mumble, his friends, his parents, and his girlfriend Gloria all live happily ever after. 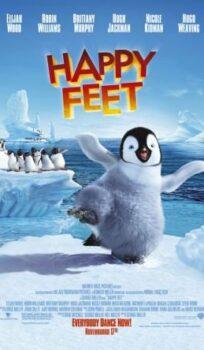