Poppy (Sally Hawkins) returns from a weekend at her sisters and sees Scott (Eddie Marsan), her embittered driving instructor, standing on the corner by her house. She calls out to him but he runs away.

That week, Poppy goes on a date with a handsome social worker she met through her job and the two begin a relationship. She spends the night with him on Friday and he drives her back to her flat in time for her driving lesson. Scott sees the two of them kissing goodbye and is visibly angry. He drives recklessly to the place where they do their lessons, and when he gets out to let Poppy drive she refuses to continue the lesson until he has calmed down. To emphasize this point, she takes his keys away from him. Scott shouts and grabs her by the hair to get the keys back, but Poppy refuses to let him drive in that state.

Scott bemoans that she had tricked him into liking her with her joyful spirit, when she had no intention of being with him. He denies having been on her corner, even though from what he has been saying it is clear that he has been watching her. When he calms down, Poppy gives him his keys back and decides to walk home. Scott asks if he will see her next week for their next appointment. Poppy tells him that he will not.

The film ends with a shot of Poppy and her roommate in a rowboat, talking about how people need to be happy in life until Poppy gets a call from her boyfriend the social worker. 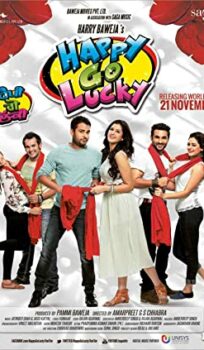