A Samurai film that shows not all Samurai have honor.

A Ronin (masterless Samurai), Hanshiro Tsugumo, goes to the Iyi clan requesting a place to commit seppuku.  They advise him that recently, another Ronin requested the same and that they forced him to do it, even though his swords were fakes made of bamboo.  Hanshiro says that does not deter him, and he tells his story of how his clan was disbanded and he entered a life of poverty.  His son in law was a Ronin also, and when his wife and child were sick, he came here in an act of desperation and was shown heartless contempt.  The clan learns that it was Hanshiro’s son in law who was forced to kill himself with bamboo swords and that Hanshiro’s daughter and grandchild died of their illness.  Hanshiro then tells of hunting down three retainers of the Iyi Clan one by one.  Hanshiro defeated them and took their topknots, an ultimate act of disgrace.  The Iyi Clan then attacks Hanshiro.  Hanshiro kills four and wounds eight until finally dispatched by fire arm wielding Samurai.  The clan then does a cover up.  The disgraced Samurai are ordered to commit seppuku, and all the deaths are officially blamed on illness. 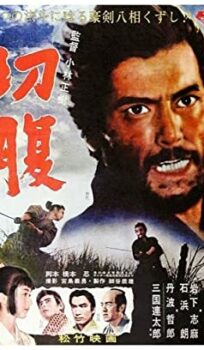