After Tom (Christian Slater) and Jim (Morgan Freeman) get the better of the sheriff (Randy Quaid) and his cronies in the church, the dam begins to overflow. Tom demands the sheriff to tell him where Karen’s (Minnie Driver) home was, since she was taken there by one of his deputies and was at risk of drowning, but the sheriff demands he allow him and his cronies to leave with a couple of bags of the money in exchange for the address. However, a dying deputy tells Tom where she is, so he hops into a motorboat and goes after her.

The dam bursts and begins to greatly flood the town. The sheriff shoots Jim and takes off in his motorboat after Tom, but Jim goes after him in another motorboat. Meanwhile, Tom gets to Karen and saves her. When they get up on the roof to escape the water, the sheriff arrives and starts shooting at them. Then, Jim appears and begins shooting at him, but the sheriff shoots his steering, causing the boat to go out of control. Jim jumps into the water while the boat goes over the roof of the house, and the motor comes flying off and nails the sheriff, sending him into the water. He soon emerges, grabbing one of the bags and attempting to shoot Karen, but Tom and Jim shoot him to death.

The state police then arrive to arrest whomever was shooting, and Tom tells Jim to leave and that he was going to turn the money in. However, Jim takes the bag of money the sheriff grabbed hold of, and then rows off into the night. 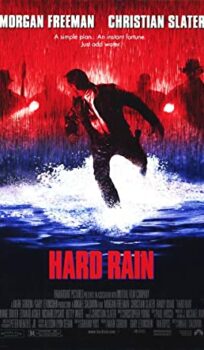