SHORT VERSION:
Ray, Quick, and their associates successfully rob Bugsy Calhoune of $1+ million made from the bets placed on the championship boxing match and also destroy the Pitty Pat Club in retaliation for Bugsy orchestrating the incineration of Club Sugar Ray earlier that day, and they finally kill Bugsy and his henchmen by tricking them into coming over to Ray’s house, where they accidentally trigger an explosive booby trap (though Ray and company spare the corrupt Detective Cantone by locking him up in a vault in a closed-down bank and telling him that they will the call the cops in a couple of days to let them know he is in there). Ray and Quick give their employees their promised severance pay of $50,000 each and then leave the area with their closest companions and the rest of the cash, but not before acknowledging that, while they can never return to Harlem, there is no place like it.

LONG VERSION:
As the championship boxing match between champion Jack Jenkins (Stan Shaw) and Michael Kirkpatrick (Gene Hartline) gets underway, two of Ray’s (Richard Pryor) men go to Bugsy’s (Michael Lerner) nightclub, the Pitty Pat Club, and after shooting several bullets into the ceiling to scare everyone out, they blow up the establishment, getting revenge on Bugsy for having Club Sugar Ray incinerated earlier that day. Meanwhile, Bugsy’s underling Richie (Vic Polizos) picks up the bag containing the $1+ million in bets on the fight from one of Bugsy’s booking houses and has it placed in the trunk of his car, and then he drives off to collect Sunshine (Lela Rochon) (who – unbeknownst to him – is a prostitute working for Ray’s associate Vera [Della Reese] who was sent to keep tabs on Richie as part of their scam on Bugsy) before he delivers the money to Bugsy.

After meeting up with her, she puts a bag of what she claims is numbers for a numbers racket in the trunk alongside the bag of cash. As they start to leave, Jimmy (Charlie Murphy) tampers with the nearby traffic lights, enabling Bennie (Redd Foxx) and Vera to drive in and crash their car into Richie’s. Ray and Quick (Eddie Murphy) then show up dressed as police officers and inform Richie that Sunshine is actually a heroin dealer known as Lady Heroin, and the bag she put in his trunk has 40 pounds of the drug in it. Quick opens the trunk and takes out the bag with the money inside, but then two white cops show up. After Richie finds out that they are Detective Cantone’s (Danny Aiello) subordinates, he tells them that he was just doing a run for Bugsy and doesn’t know anything about the heroin, so the white cops take the money bag and put Sunshine in their car and tell Richie that he can go on about his business, seemingly ruining Ray’s and Quick’s scheme. After that all transpires, Bugsy realizes that the boxing match was not fixed like Ray had led him to believe when Jenkins retains his title, and then he receives word from one of his men about his club’s destruction.

Cantone – who had been following Richie on Bugsy’s orders and saw the car accident and who was involved – follows Ray and Quick until they enter a closed-down bank. He confronts them at the entrance to a vault and commends them for the scam they just tried to run but doesn’t understand why they would break into this bank. Quick explains that, with Richie doing a pickup that big for Bugsy, it would make sense for Bugsy to have Cantone tail him, and they are now here in order to make a “deposit”. Ray then tells Cantone to put down his gun, after which Ray’s guys appear behind Cantone with their own guns aimed at him. The group ties up Cantone and seals him inside the vault, but not before taking his hat, jacket, and badge and telling him that they will call the police in two days to let them know he is in here. Quick also advises Cantone to take very short breaths so he doesn’t run out of air before he gets rescued (which Cantone actually proceeds to do).

Richie arrives at Bugsy’s residence just as he is declaring to his men that he is going to kill Ray over what he just did to him, but when Richie opens up the bag he has, he finds nothing but wrapped-up powder inside. Richie tells Bugsy all about his episode with the cops earlier on and says that they must have taken the bag of money and left the bag of heroin behind by accident, but adds that the white cops who took it were Cantone’s guys. Bugsy orders one of his goons to ring up Cantone, and after lambasting Richie for his error, he samples the contents of one of the wrappers and discovers that they actually contain sugar, and he quickly figures out that Ray is responsible for this.

After Bugsy learns that Cantone isn’t answering his phone, Vera pays him an unexpected visit. Pretending to betray Ray and Quick, she tells him that she had nothing to do with what just happened to him, and then tells him that both Ray and Quick are over at Ray’s house. After Vera departs, Bugsy, Richie, and the other henchmen immediately go over there, but they find the place vacant. One of the henchmen then points out Cantone’s belongings resting on a living room table, and after some thought, Bugsy concludes that this is all a setup. However, when another one of the goons makes a hasty attempt to get out, he accidentally triggers an explosive booby trap that kills himself, Bugsy, and everyone else.

Over at a motel in Hoboken, New Jersey, Ray, Quick, Bennie, Vera, and Ray’s woman Annie (Berlinda Tolbert) are shown preparing to take their leave from the area. Ray gives his thanks and a nice payment to the two white cops, who are actually actors that he and Quick hired and who gave them the money once they got to the motel, and Ray has given his employees their promised severance pay of $50,000 each as well. Before they drive off for elsewhere, Ray, Quick, and Bennie take one last look at Harlem and acknowledge that, while they can never go back there again, there is no place like it. 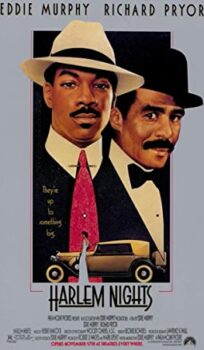