Harley Davidson and the Marlboro Man(1991)

POOPER:
Harley and Marlboro kill Alexander and Chance and save the bar. Marlboro returns to competitive bull riding while Harley decides to stay in LA to presumably run the bar. Harley then rides away with a hitchhiker.

LONG VERSION:
Harley Davidson (Mickey Rourke) and Marlboro Man (Don Johnson) are best friends who see each other after a long absence. They visit the Rock and Roll Bar, their old hangout in Los Angeles, where they meet their friends Jack, Jimmy, Jose, and Old Man. Old Man tells them that the bank that holds their lien has increased the rent in order to drive them out of business so that the bank can build a new skyscraper on the property. The group decide to rob an armored truck and then use that money to buy the property and save the bar. The plan isn’t thought out very well, but it does work, until several henchmen led by Alexander (Daniel Baldwin) suddenly arrive and begin shooting at them. Harley, Marlboro, and the rest of the robbers get away and make it to their hideout at an airplane graveyard, only to discover that instead of money, they stole several bags full of an uncut drug with the street name Crystal Dream. We then learn that the bank that they stole from (and also holds the lien on the bar) is actually a front for a drug dealing banker named Chance Wilder (Tom Sizemore). Chance orders Alexander to get the drugs back and kill the robbers.

After learning that Crystal Dream is a 100% addictive narcotic that is lethal after prolonged use, Harley and Marlboro talk with Chance and agree to give back the drugs for $2.5 million, the amount needed to buy the bar, and an extra dollar to pay off a bet. Alexander goes to their hideout and the trade goes smoothly. That night, the group is celebrating their good fortune when Alexander and the henchmen arrive and begin a shootout. Harley and Marlboro kill two of the henchmen and escape, but Jack, Jimmy, Jose, and Old Man are killed. They go to Las Vegas to lay low and figure out what to do, but Alexander and the surviving henchmen suddenly appear and give chase, ultimately ending with Harley and Marlboro jumping from the roof of the Dunes casino into a swimming pool. Harley later figures out that they were found because Chance put a tracking device inside the dollar coin.

Because they owe it to their dead friends, Harley and Marlboro return to the airplane graveyard and reactivate the coin tracker. Alexander and the henchmen go there and begin another shootout, which results in the deaths of the last two henchmen. Alexander is able to get the drop on Marlboro and his holding him hostage. Harley, a notoriously bad shot, tries to shoot Alexander but hits Marlboro on his first shot. On the second, Harley hits Alexander and then he and Marlboro team up to kill him. They then get in Alexander’s helicopter and pay off the pilot to take them to Chance’s office. They arrive and make another offer to Chance. They will return the money in exchange for the lease on the bar. Chance refuses and orders his bodyguards to kill Harley and Marlboro. At that time, the helicopter appears and shoots out the office, killing the bodyguards. Chance and Marlboro get into a fistfight, which ends with Chance falling out of his office window to his death.

The final scene is at a rodeo, where a fully healed Marlboro has decided to return to his first love of competitive bull riding. Harley tells Marlboro is he staying in LA, presumably to run the bar. He and Harley part ways, and Harley picks up a hitchhiker as he drives off. 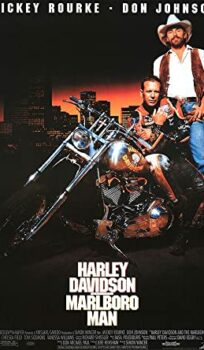