Pooper:
Stella (Barbara Eden) is elected the new president of the Harper Valley PTA and flies off into the sunset with Willis Newton (Ronny Cox) in his helicopter to get married.

Long version:
Stella (Barbara Eden) teams up with her friend Alice (Nanette Fabray), her daughter Dee, her new boyfriend Willis Newton (Ronny Cox), and her bartender friend Herbie to take down the members of the Harper Valley PTA for their misdeeds.

When the PTA members have an urgent meeting to reelect Flora Simpson Reilly president (over Stella), Dee goes to the meeting and manages to stall them for hours by making them follow proper guidelines to hold a PTA election.

Stella and Alice track down PTA secretary Olive Glover  at the stables for the racetrack. Olive had stolen money from the PTA funds to support her gambling addiction and framed the theft on Dee’s friend. Willis had written a good luck message on five of the bills he donated at their last fundraiser, so they know that if they can find the bills on Olive they can prove her guilt. Stella and Olive struggle over Olive’s purse, but Alice dumps a truckload of hay and horse droppings on Olive to end the fight.

Willis takes Herbie up in his helicopter to search for Skeeter, the missing PTA board member (the other PTA board members had him kidnapped by goons to keep him away from the vote because they knew he would vote for Stella). They locate him at a monastery and radio Stella and Alice, who go bust him out.

Stella, Alice, and Skeeter narrowly escape the goons–who chase them on the highway–and crash the PTA meeting just as they’re getting ready to vote. The police arrest Olive (who is still covered in the mess from the race tracks). Stella emerges victorious–having been named the new president of the Harper Valley PTA.

Outside, Dee meets up with the guy she had been crushing on at school and Willis proposes to Stella, who happily accepts. They get in his helicopter to get married and fly off together. 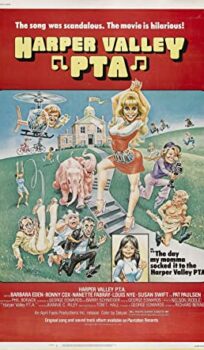