Harry and the Hendersons(1987)

As the Hendersons and Dr. Wrightwood (Don Ameche) – who is elated to have finally seen a Bigfoot after he had given up all hope in believing they existed – are returning Harry (Kevin Peter Hall) back to the safety of the forest, Jacques (David Suchet) catches up with them, still intent on killing Harry. They all try to lead Jacques away from Harry by using Wrightwood’s Bigfoot foot casts in the snow to make false tracks, but the two eventually confront each other. Harry disarms Jacques and seizes hold of him, and waits with him at the Hendersons’ car until the family and Wrightwood show up.

Jacques almost escapes, but George (John Lithgow) stops him, and he tries to drive into his head that Harry was not an animal and that killing Harry would be murder, all the while slamming him repeatedly against the car. Harry stops George and pushes him aside, and he shows Jacques how kind he truly is by petting his head, hugging him, and shaking his hand. After seeing this, Jacques casts away his desire to kill him.

Dr. Wrightwood, Jacques, and the tearful Hendersons send Harry off, and as he leaves, three other Bigfoots – two adults and one child – emerge from different hiding places and follow him into the woods, much to the joyful surprise of everyone. 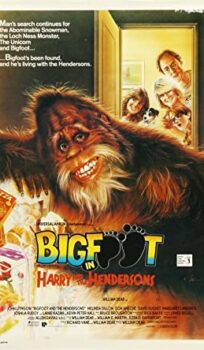