After his best friend is murdered Harry Brown (Michael Caine) goes on a vigilante rampage, killing those he feels responsible not only for the death of his friend, but for the desecration of the neighborhood.

At the same time Harry is trying to kill his final target Noel Winters, he saves DI Frampton (Emily Mortimer) and DS Hicock (Charlie Creed-Miles) and takes them to his favorite pub where he knows the owner Sid (Liam Cunnigham).

Frampton talks to Brown, telling him she’s knows he the vigilante and Sid will kill him if he kills Noel since he’s his uncle.  Harry confronts Sid, who’s been hiding Noel but is overpowered. Sid and Noel plan to kill all three and make it look like riot violence. Sid kills Hicock, and Noel starts to strangle Frampton. Harry kills Noel with a hidden revolver, and Sid is taken out by police snipers.

The film ends with a press conference, denying a vigilante, and awarded Frampton and the deceased Hicock with medals of bravery.  Harry is seen walking in his calmer neighborhood and finally takes the walkway he had been too scared to walk through before due to the gang violence. 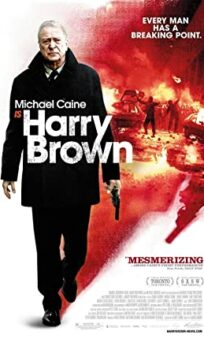