Harry Potter and the Deathly Hallows(2011)

With Salazar Slytherin’s locket around his neck, Ron’s emotions about Hermione and Harry are compromised when he begins to feel all sorts of rage and jealousy towards the two. Harry takes the locket from Ron. Ron leaves them to find the horcruxes on their own. Harry and Hermione return to the place where Harry’s parents were killed, where they are ambushed by a human-disguised Nagini (Voldemort’s pet snake). In the struggle, Harry finds his wand, but once they are apparated to safety, Hermione reveals that it was broken by her accidentally misfiring a curse. While guarding the protected area, Harry sees a patronus in the shape of a doe, which leads him to a frozen pond and reveals the sword of Godric Gryffindor beneath the ice. As Harry swims beneath the surface, the locket begins to choke him as it attempts to avoid the blade that can destroy it and the necklace begins to choke Harry beneath the icy surface. Luckily, Ron comes back to save him. When Harry used the sword to kill the basilisk in book 2, the blood and essence of its venom was magically absorbed and infused by the blade, making it able to destroy any horcrux as the basilisk fang destroyed the diary of Tom Riddle. Ron ultimately destroys the locket.

At Xenophilius Lovegood’s home, Harry, Ron, and Hermione learn the legend of the three Peverell brothers who cheat Death and allow him to create three very powerful items for them. They are the Elder wand (the world’s most powerful wand), the Resurrection Stone (a gem that can resurrect the dead), and the Cloak of Invisibility (a part of Death’s shroud which has been used by Harry since book 1).

It turns out Xenophilius was biding his time to turn over the three so that the Malfoys would return Luna to him. The Lovegood home is ambushed, but Hermione, Ron, and Harry manage to apparate to a forest location where they are immediately captured by a band of Snatchers. One of the Snatcers recognizes Harry’s trademark lightning scar and insists they all be brought to the Malfoy home. When Bellatrix sees that the three have Gryffindor’s sword in their possession, she goes absolutely mental as it was safely secured in her personal safe at Gringott’s bank. After speaking to the goblin owner of Gringott’s, Bellatix begins to torture Hermione (in a very well-done scene that needed to be cut so as to avoid an R-rating). As things look bleak, Dobby conveniently arrives to help Ron, Harry, Luna, and Mr. Ollivander (the wand salesman) out of the cellar. In a brief struggle, Harry manages to steal several wands from Draco, and Dobby steals Narcissa Malfoy’s wand as he makes a statement of how he is a free elf and can help who he wishes to help. Dobby then apparates the entire group to a beach, but not before Bellatrix carefully aims a thrown dagger at his chest. Dobby dies on the beach while recanting how good it is to be around friends on such a beautiful day. Harry proclaims that he wants to bury Dobby properly without using magic. After a brief mourning, Harry sees a shared vision of Voldemort opening Dumbledore’s casket and removing the Elder Wand, as Voldemort is sure it will be powerful enough to kill Harry.

TO BE CONCLUDED SUMMER 2011

Mini spoiler
4 horcruxes remain. For the non-book readers, be ready for an amazing sequence involving Neville and the Sorting Hat, and prepare yourselves for the uproar that will be caused at Molly Weasley’s taunt toward Bellatrix Lestrange before the series’ only real battle between witches. 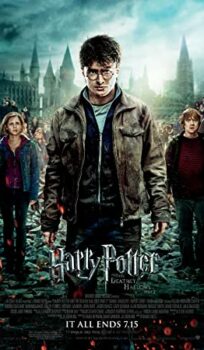