Harry Potter and the Goblet of Fire(2005)

Harry Potter and the Goblet of Fire

Death Eater Barty Crouch Jr. (David Tennant) has been using Polyjuice potion to disguise himeslf as Alastor “Mad-Eye” Moody (Brendan Gleeson). He rigged the Triwizard tournament so that Harry (Daniel Radcliffe) would win, and turned the Triwizard cup into a portkey to transport Harry to Lord Voldemort. Harry, however, decides to share his victory with Cedrick Diggory (Robert Pattinson), and the two boys touch the cup together. They are ported to Voldemort’s ancestral home, where Wormtail (Timothy Spall) murders Cedrick. Wormtail also obtains Harry’s blood, the last ingredient Voldemort needs to get himself a new body (Ralph Fiennes). Voldemort summons his Death Eaters to watch him kill Harry, saying that he was thwarted by the “old magic” of a mother’s love 13 years ago, but that Harry won’t be so lucky this time. He challenges Harry to a duel, but their wands, having the same “core,” (a feather from the tail of Fawkes the phoenix), lock on each other, rather than the opposing wizard. Eventually, the effect of Priori Incantatem forces Voldemort’s wand to disgorge the shadows of its previous victories. The spirits of Cedrick Diggory, and Lily and James Potter help Harry to break the spell, reach Cedrick’s corpse and the cup, and get back to Hogwarts. Crouch is captured, the real Moody is freed from captivity, and the students are informed that Voldemort has returned. 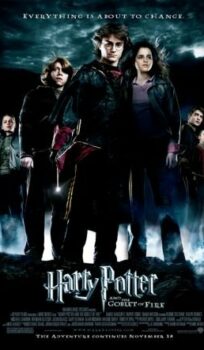