Harry Potter and the Order of the Phoenix(2007)

Throughout the film the Ministry tightens its grip on Hogwarts to the point where Albus Dumbledore (Michael Gambon) is forced out and Dolores Umbridge (Imelda Staunton) takes control. Student life becomes miserable and dark. In a show of defiance, Fred and George Weasley set of an array of fireworks that interrupt Ministry examinations.

During the celebration, Harry collapses and has a vision, following on from the many he has had throughout the film. He sees Sirius in trouble at the Ministry, in the Department of Mysteries. He quickly gets rid of Umbridge with the help of Centaurs, then along with Ron, Hermione, Ginny, Neville and Luna, he flies to London and enters the Department. Sirius is not there. The vision was a fake planted by Voldemort to lure Harry there.

In the Hall of Prophecies at the Ministry, Harry finds an orb with his name attached. He picks it up, and Death Eaters appear. The orb is a prophecy made about Harry, and only Harry could remove it from the shelves. Because Voldemort greatly desired to hear the contents of this prophecy, he needed Harry to get it.

Members of the Order of the Phoenix appear and there is a battle between them and the Death Eaters, during which Sirius is killed by his cousin Bellatrix. Harry pursues Bellatrix and attacks her, before Voldemort himself appears. Dumbledore shows up immediately and there is a duel between the two powerful wizards. Voldemort attempts to possess Harry but Harry’s ability to love again subdues the Dark Lord’s efforts.

Voldemort disappears with his followers, but not before being spotted by Ministry members. The Ministry is proven wrong and humbled, and Hogwarts is returned to Dumbledore’s control.

Dumbledore explains the prophecy’s meaning to Harry: because Voldemort marked Harry as his equal (during the first attempt to kill him, as a baby), now only Harry can defeat Voldemort. 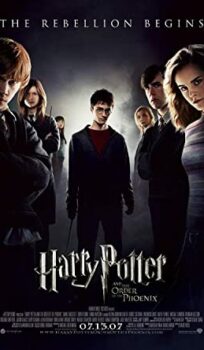