After catching the rhino and, according to The Indian (Bruce Cabot), “breaking the jinx” -referring to the incident at the beginning of the movie, in which The Indian ended up getting gored on a failed previous attempt to capture a rhino-, the group wants to go to Arusha to celebrate; Pockets (Red Buttons) attempts to convince a lonely and visibly distraught Dallas (Elsa Martinelli) to join them, but she refuses. Then, Sean (John Wayne) himself gives it a try, only to have Dallas angrily lash out at him because she was obviously in love with him but he neither reciprocated nor was straightforward about his feelings towards her; he walks off, confused.

The next day, the group discover Dallas departed and left a letter behind; as Sean is not willing to let her go this time around, they all take off to find her -except for The Indian, who stays behind and warns the authorities not to let Dallas leave the country-, intending to use baby elephant Tembo to help them track her -all three baby elephants tag along, anyway!!-. The searching party corners Dallas in a hotel in town.

In the final sequence, everyone is back at the compound; Dallas is seen in bed and Sean intends to pick up where they left off on their conversation; in comes a drunken Pockets, to whom Sean informs he and Dallas had just gotten married and tries to kick out of the room. But, then, the little elephants enter the room, destroy the bed and hilariously wreak havoc, as the movie ends. 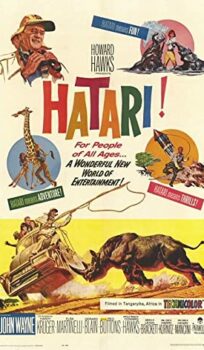