Pooper:
Marybeth is once again the only person to make it to the end. She catches Victor off-guard as he finishes dispatching Rev. Zombie, and hits him in the face with his own hatchet. When he goes down, she jumps on top of him and continues the assault, reducing his face to pulp. She then blows his head off with a shotgun as the screen slams to black.

Long Version:
The film picks up right where the first one left off, with Marybeth (now played by Danielle Harris) in Victor Crowley’s (Kane Hodder) grasp. She pokes him in his right eye and tries to swim away. Fortunately, Jack Cracker (John Carl Buechler) happens to be passing by in his boat and picks her up. Back at his cabin, he learns that her last name is Dunstan. This freaks him out, so he threatens to shoot her unless she leaves. Marybeth is confused by his change in demeanor. He tells her that if she wants to know why he wants her gone she should talk to Rev. Zombie (Tony Todd). After Marybeth departs, he “tells” Victor that he didn’t know who she was, and starts to watch the footage from Shapiro’s (Joel Murray) camera. Victor appears a minute later and kills him.

Marybeth makes her way back to Rev. Zombie’s shop and tells him about the previous night’s events, including Jack freaking out. When she tells Zombie her last name he informs her that one of the boys who was there the night Victor died was her father. He knows this because he would have been there too if he didn’t chickened out. It’s then that we learn more about the legend of Victor Crowley:

When his father Thomas (Kane Hodder) was married, his wife Shyann (Kathryn Fiore) became ill and a nurse named Lena (Erika Hamilton) was hired to help take care of her. The two had an affair, and Victor was conceived. Thinking that Shyann had finally passed away, Lena & Thomas kiss while standing near her body. Shyann sees this and places a curse on the child before she finally expires. This explains his appearance (and possibly how he was able to return after he died). Lena died during his birth (after seeing him for the first time), and the rest was history. Zombie calls Victor a “repeater,” a ghost who is forced to relive the time they died forever, and whoever sets foot on Honey Island Swamp at night has to face his wrath. He theorizes that the only way to stop him is to destroy his head.

Marybeth tells Zombie that she wants to go back to the swamp and retrieve her brother & father’s bodies, and hopefully put Crowley down for good. When Zombie objects, Marybeth threatens to go to the police about his illegal swamp tour. Zombie agrees after getting Marybeth to bring along a relative. He also gathers some hunters to accompany them to improve their chances. He tells his assistant Justin (Parry Shen), Shawn’s twin brother to make sure that Trent (R.A. Mihailoff) joins the group. Marybeth returns home to clean-up, and tells her uncle Bob (Tom Holland) what happened. She actually leaves without him, but he follows her to Zombie’s shop and volunteers to go with her.

Shortly after reaching their destination, Rev. Zombie informs Justin of his true plan: By letting Crowley kill Trent & Marybeth’s uncle, his soul should be appeased and leave the swamp. The party is picked off one-by-one (and in one case 2 at the same time) until only Uncle Bob, Marybeth & Zombie remain. Zombie traps Bob in Victor’s shack and he’s horribly dispatched. Zombie exclaims that with Victor gone, the swamp belongs to him. As he prepares to get rid of Marybeth after she once again threatens to go to the authorities, she tells him that Uncle Bob wasn’t really her uncle. He was actually her father’s best friend. Her real uncle died years ago from leukemia. After this revelation, Victor emerges from his shack and battles Rev. Zombie. After a brief scuffle, Crowley kills him but is surprised by Marybeth who, just like she vowed to do earlier, buries his hatchet in his face. She then jumps on top of him and pulverizes his face until it resembles a smashed pumpkin. Marybeth walks away, but Victor’s left arm begins to twitch, showing that he still has some life left in him. Marybeth returns with Zombie’s shotgun and takes his head off. Slam-cut to black.

Thanks, “He Who Poops Movies” 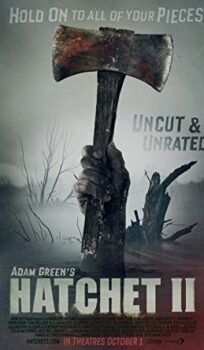