This film is considered by many to be the biggest flop in Hollywood history. Made for a then-astronomical budget of $36 million, it barely earned $3 million at the box office. It nearly bankrupted United Artists and filmmaker Michael Cimino’s career never recovered.

SHORT VERSION
Jim and the settlers fight the Association in what would later be called the Johnson County War. Nate, Billy, John, Ella, and Canton are all killed, along with most of the settlers. Jim eventually moves back East and marries his college girlfriend.

LONG VERSION
The movie opens in 1870 as best friends Jim Averill (Kris Kristofferson) and Billy Irvine (John Hurt) are graduating Harvard University. The scene ends with a celebration and a large group dance, where we see Jim and Billy dancing with their girlfriends. The movie then moves forward to 1890, and the location is now Johnson County, Wyoming (near Casper). Jim is the county sheriff of this booming region, where the bulk of the settlers are poor Russian immigrants who are stealing cattle to feed themselves. The local cattle barons, known as the Association and led by Frank Canton (Sam Waterston), compose a list of 125 people who they consider to be thieves and anarchists. They will hire gunmen to come to Johnson County to kill these people. The “anarchists” are actually people who have stolen cattle from the Association. It’s revealed that Billy is one of the members of the Association, but is strongly against the death list.

Jim is in love with Ella Watson (Isabelle Huppert), the madam of a local brothel. His best friend is Nate Champion (Christopher Walken), who is also in love with Ella. Neither of them know he is also a gunman working for the Association, and he is killing immigrants who steal their cattle. Throughout the movie, both Jim and Nate are trying to make Ella only love him. When news of the death list reaches Johnson County, the settlers, led by shopkeeper John Bridges (Jeff Bridges), are scared, but they trust the law will protect them. Nate, who had been killing settlers, learns that Ella is on the list because she accepted cattle as payment for her services. Later, some of the Assocation rape Ella, but all but one are killed by Jim. The one that gets away is later killed by Nate, who then quits the Association. Canton then adds Nate’s name to the list for refusing to participate in the killings.

The local train conductor, who is also a friend of Jim, sees the gunmen arrive by train and goes to Johnson County to warn everyone, but is killed by the gunmen before he can make it there. The gunmen’s first stop is Nate’s house, where he and Ella are living together. Earlier that week, Ella had been forced by Jim to choose between himself and Nate, and she chose Nate. The gunmen kill Nate and Ella barely gets away. Ella then goes to John’s shop, where the settlers are arguing about what to do since the law isn’t protecting them. When she announces that the gunmen are here, the settlers decide to confront them and fight back. The resulting battle, led by Jim and John, would later be known as the Johnson County War. Most of the Association’s gunmen, as well as many of the settlers, are killed in the bloody battle. Billy, who was with the Association but refused to fight, is among those killed.

The US Cavalry arrives and takes the surviving gunmen into custody, ending the battle. Later that day, Ella reconciles with Jim and agrees to leave Johnson County with him. John, who had returned to Jim’s house after the battle, also decides to leave the county. But as they are leaving the house, Canton ambushes them, killing John and mortally wounding Ella. Jim then kills Canton, and holds Ella in his arms as she dies.

The final scene takes place on a yacht near Newport, Rhode Island in 1903. Jim is the owner of the yacht, and he goes below and sees a woman lying on his bed. She is his old college girlfriend, and it’s implied that Jim went back East and married her after the events in Johnson County. 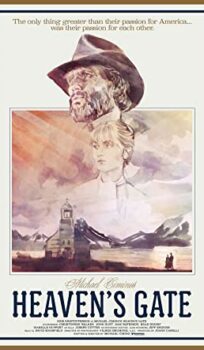