Julie (voiced by Julie Strain) saves her sister Kerrie (voiced by Sonja Ball) from Tyler’s (voiced by Michael Ironside) scientist Dr. Schechter (voiced by Arthur Holden) and kills him before departing. Odin (voiced by Billy Idol), a priest from the Holy Land that had accompanied Julie for the majority of her time on the planet, reveals to them that the Arakacians, a malevolent race that were the first masters of the Chamber of Immortality and had a vast empire, once had dominion over Julie & Kerrie’s home planet and stored some of the immortality water there. When the Holy Landers took them out and ended their rule, the forgotten water went into the soil and traces of it went into the bodies of Julie’s people. That was why Tyler attacked the planet and distilled the water from their bodies. Julie, Kerrie, Odin, and his stone bodyguard Zeek (voiced by Rick Jones) make it to the Holy Land, where Julie suits up for Tyler?s impending attack and also learns to her annoyance that Germain (voiced by Pier Paquette) was still alive.

Tyler leads the lizard people of Shantar whom he attained lordship over by killing their leader in a battle against the Holy Landers, but during the battle he loses his last vial of immunity water and makes a mad rush to the top of the mountain to open the Chamber of Immortality. Julie immediately pursues him. She and Tyler fight, Tyler managing to get the Chamber open with the crystal key he acquired near the start of the film, but when he turns his attention away from Julie to stab Odin, Julie leaps onto him and soon snaps his neck and kills him.

As Julie goes to remove the key, Odin knocks her down, and reveals that he is actually an Arakacian. He had been working to keep Tyler alive long enough to open the Chamber for him. He enters the Chamber and looks to claim the power of the waters, but Zeek, having seen his master’s true form, removes the crystal key to the Chamber, and a livid Odin hurries back to the entrance before it closes on him. Zeek takes off into space with the key as the new Stone Protector, and Odin ends up trapped in the Chamber.

Kerrie and Germain show up, and assist the hurt Julie down the mountain. Zeek is last shown going through space, key in hand. 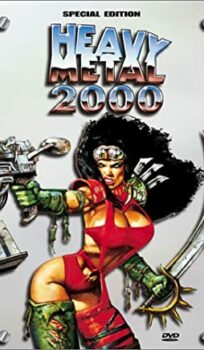