SHORT VERSION:
With Michael’s help, the standoff at the Sip N’ Zip comes to an end with Rodrigo getting himself, and the crate containing his father’s body, onto a bus bound for Mexico (he wanted to bury his father in their hometown). Mary comes along with him, having fallen for him and having earlier publicly dumped her unfaithful boyfriend. As the crowd that was watching the standoff disperses, Michael finds himself unable to hitch a ride to the Las Vegas Airport with anyone, but then, the biplane that he called for before the standoff first went down finally makes its arrival. After Michael realizes that he lacks the $35 needed for the flight, Sheriff Pembry gives him the cash and wishes him well. During the flight, Michael spots his stolen car on the ground along with the car thief, who is now dealing with the frustration of the engine having overheated and seized up, and Michael yells to him that he can keep the car.

Michael arrives at the airport and looks all around the terminal for Rae until he finds the gate that the flight to Chicago is leaving out of, but he discovers that the plane has already taken off. As he walks back inside thinking that he has lost her for good, Rae shows up riding in a baggage tug, having backed out at the last second, and they happily hug. As they are flying back home on another plane, the plane suddenly gets hijacked, but the hijackers turn out to be Rodrigo’s accomplices Trina and Sal, who had abandoned him at the Sip N’ Zip when the cops first showed up there. They happily greet Michael when they see him, much to his annoyance and embarrassment.

LONG VERSION:
Having gotten tired of the predicament he is in at the Sip N’ Zip and wanting to get to Rae (Nia Long) at the Las Vegas Airport before their 6:00 p.m. flight to Chicago departs, Michael (Jamie Foxx) forces Rodrigo (Eduardo Yáñez) to take him outside as a hostage so he can speak to Sheriff Pembry (Barry Corbin) and the other cops via megaphone. He yells to Pembry that he is sick of what has happened to him ever since the standoff began and he is running out of time, so Pembry asks him what he wants. Michael tells Pembry that Rodrigo will release him, Jack (John Cullum), Clarence (Michael Shamus Wiles), and Mary (Sarah Paulson) if he can provide transportation to the airport by 6:00 p.m. Rodrigo quietly asks him what he is talking about, and Michael answers that this is the best way for them to get where they need to go. Rodrigo then gets on the megaphone and says that someone will be going to Mexico with him besides Michael, and Michael again states that they need transportation to the airport by 6:00, but adds that Rodrigo will now need two plane tickets as well, and if Rodrigo’s demands are not met, then he and the rest of the hostages will die.

While they wait, Michael pulls out his photos of Rae and reminisces with everyone about how they first met, and at the same time in the airport, Rae does the same with Gloria (Julie Hagerty), a bartender she has befriended, and she eventually says that she hopes that he does make it to the airport. Shortly afterwards, Pembry informs the guys over his megaphone that, with the cost of putting up a new scoreboard for the little league baseball field as well as fiscal cutbacks, the mayor says that there is no way they can charter a plane for them. However, what they can do is get them a bus that goes down through Nogales and Yuma. Michael agrees to it, but also says he wants two dozen red roses sent to the airport for Rae immediately. Soon after, Dale appears with a skunk in lieu of tear gas to try to flush everyone out, and with Deputy Clute’s (Gary Owen) help, he sticks the animal into the ventilation duct.

Michael soon asks Rodrigo what his job was before he decided to hold up this convenience store, and he says he was a migrant worker. He explains that he and his father came to the U.S. looking for work when things weren’t going well for them in Mexico and they hooked up with a couple of harvesting companies, and they worked long hours for little pay for a long time until his father died from it. The SWAT team from Las Vegas that Pembry called for then finally arrives, as well as Mary’s unfaithful boyfriend Sonny (Dalton James). Mary gets on the megaphone, as does he, and she asks him where he was. He replies that he came over as soon as Clute told him about her situation, but Mary points out that Clute came back a long time ago. She then confronts him with the knowledge she has about how he has been sleeping with Pamela behind her back, and when Sonny tells her to shut up, Rodrigo – having developed a mutual attraction to Mary – comes to her defense, telling him that he can’t talk to her like that. Mary soon kisses him and tells Sonny that she is going to join Rodrigo when he leaves for Mexico, and Pembry then orders Sonny to leave.

Three SWAT officers then enter the ventilation shaft and sneak up to a grate leading directly into the store, and then the Wildcatters little league baseball team (whom Pembry coaches) appears in their bus cheering, and Pembry finds out that the team won the game they had today and will be going to the Nationals. While the SWAT officers are awaiting the order to fire, the skunk suddenly appears and sprays one of them, and the confusion causes him and the other two to fall through the ceiling into the cooler and make their guns go off, and Rodrigo winds up cuffing two of the officers to a pipe in the freezer and grabbing hold of the officer who got sprayed. Meanwhile, Pembry gets informed by Deputy Beaumont (Jake Busey) that, because of a new problem involving the town treasurer embezzling from the town’s coffers, the bus to Mexico has been downgraded to a tour bus on loan for an hour, and the flowers being sent are a cheap leftover bouquet from a Las Vegas funeral.

Rodrigo then appears with his captive SWAT officer and angrily asks Pembry why he would send this guy in after him when he didn’t hurt anyone in there, and Michael then shows up and backs up Rodrigo, telling Pembry that, if he messes around, he is going to get everyone inside killed. After Pembry informs them that the bus is on its way here now, Rodrigo lets the SWAT guy go and heads back inside with Michael, and the officer tells Pembry that there is a body in there. Back in the store, Michael looks through the cooler’s doors with the others and sees a leg sticking out of Rodrigo’s mystery crate that got broken when the officers fell in, and after making an exclamation upon seeing it, Rodrigo tells him and the others to get away from “him”, and they begin to think that Rodrigo has killed someone.

Rae gets the flowers, but she is confused by the sympathy message as well as how it has been sent by “Mike Tyson”, whom North Butte’s residents have confused Michael for. Beaumont soon calls Michael on the payphone inside the store and requests his help in taking down Rodrigo, saying that he and the other cops will ensure that Rae’s flight stays on the ground if he agrees to play ball with them. Michael agrees to assist them, so Beaumont instructs him to get Rodrigo to release everyone else, then come out with him, and then Pembry will give him a signal for him to hit the dirt, and the law will take care of the rest. After the call is ended, Pembry tells Beaumont that he wants him to take out Rodrigo with the first shot.

The bus then arrives, and Jack and Clarence come out and get to the safe side first. Rodrigo then comes out with Michael and Mary and slowly walks towards the officers with them, and they accuse him of being a killer and question him about the body in the crate. He explains that he didn’t murder anybody; the crate contains his father’s corpse, and he is trying to get back to Mexico with it in order to bury him in their hometown. Pembry gives his signal to Michael, but Michael tells the others to keep moving with him. Mary’s loose heel then breaks, causing her and Michael to fall, and Clute soon fires a shot at Rodrigo that just grazes the right side of his neck. Michael confesses to Rodrigo that the cops tried to get him to set him up, and Mary points Rodrigo’s gun at Pembry and Beaumont and orders them to leave him alone, then tells them that the body is Rodrigo’s father and he is trying to get him back home. Pembry and his men holster their weapons, and Michael soon orders Pembry to make good on what he promised, starting with helping Rodrigo with what he has to do. When Beaumont points out that they can’t do that because the town is broke, Michael appeals to the citizens watching all of this to make donations, so they all do, with him donating his last $50. He then asks Pembry to get him his ride to the airport, but he admits to Michael that that won’t do him any good; he lied about being able to hold the plane for him, having only said it because that was what his book on hostage situations told him to say. Back at the airport, Rae’s flight gets called, and having accepted that Michael isn’t coming, she says farewell to Gloria and heads for her gate.

Michael helps Rodrigo load the crate into the cargo hold of the bus, and he says goodbye to him, Mary, and Clarence, the latter of whom is driving the bus to Mexico for them. Shortly after the bus goes, the crowd disperses, and after Michael says farewell to Jack, he tries to hitch a ride to the airport from a few of the departing cars, but the drivers just ignore him. However, Jose’s (Sam Vlahos) biplane – which Michael had earlier requested for before the robbery first went down – finally arrives with his daughter (Kathryn Winslow) piloting it, and she agrees to fly him to the airport for $35. When he remembers that he is now out of cash and starts fretting, Pembry gives him the money and wishes him well.

During the flight, Michael spots his stolen car on the ground along with the car thief, who is now dealing with the frustration of the engine having overheated and seized up, and Michael yells to him that he can keep the car. The pilot lands at the airport, and Michael looks all around the terminal for Rae until he finds the gate that the Chicago flight is leaving out of, but he discovers that the plane has already taken off. As he walks back inside thinking that he has lost her for good, Rae shows up riding in a baggage tug, having backed out at the last second, and they happily hug.

As they are flying back home on another plane, the plane suddenly gets hijacked, but the hijackers turn out to be Rodrigo’s accomplices Trina (Roselyn Sanchez) and Sal (Diego Fuentes), who had abandoned him at the Sip N’ Zip when the cops first showed up there. They happily greet Michael when they see him, much to his annoyance and embarrassment. 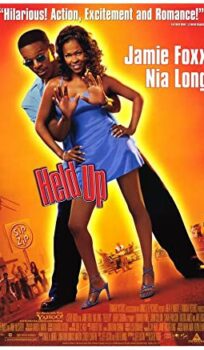