Prince Nuada (Luke Goss) decides that humanity should die due to their greediness. His father tries to convince him otherwise, but fails. His father sentences him to death, so Nuada kills him and goes after his sister who is in possession of the last piece of a crown needed to unleash a golden army, which will destroy humanity and cannot die.

At the headquarters, Princess Nuala (Anna Walton) is in protection of Hellboy (Ron Perlman) and his team. Nuala has the last piece of the crown and hides it while at the headquarters. Nuada hits the headquarters and stabs Hellboy with a special spear that the team cannot remove. He then takes his sister, even though she does not have the crown piece with her.

The BPRD take his body to Northern Ireland to have him revived by the Angel of Death. She tells them that if they do this, humanity is doomed. They do it anyway, of course and Hellboy takes the team to the resting place of the Golden Army where Nuada is. Abe Sapien (Doug Jones) then gives the crown piece to Nuada in exchange for Nuala, because he is in love with her. The army is awoken and attacks the team. They find out the army regenerates and cannot be stopped by anyone else but the person possessing the crown.

Hellboy challenges Nuada to the right for the crown. Nuada accepts because Hellboy is royalty in Hell. Abe tells Hellboy that he cannot kill Nuada, because he and Nuala have shared souls, so when one feels pain, so does the other. Hellboy and Nuada fight with Hellboy winning, but he does not kill him. Nuada tells him that he will keep fighting until he dies, so Nuala kills herself to kill Nuada. Before she dies, Abe tells her he loves her. Liz (Selma Blair) grabs the crown and destroys it, stopping the army.

The team leaves, as their boss (Jeffrey Tambor) yells at them. They tell him they retire from the agency and walk off as Liz announces she is having twins with Hellboy. 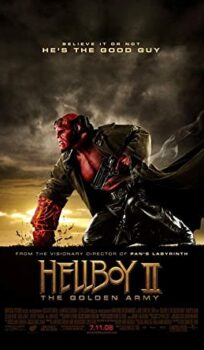