Henry: Portrait of a Serial Killer(1986)

Pooper:
Henry kills Otis when he catches Otis raping Becky. After they dispose of Otis’ body, Becky tells Henry she loves him and they propose a plan to run away together. However, Henry murders Becky too and disposes of her body before moving on to the next town.

Long Ending:
This is loosely based on the story of real-life serial killers John Lee Hooker and Ottis Toole.

Becky (Tracy Arnold) has abandoned her abusive husband and moves into her brother Otis’ (Tom Towles) apartment in Chicago. Otis suffers from clear mental illness and, although he is generally nice to his sister, he also looks at and touches her inappropriately. Otis is an ex-con and lives with one of his old cellmates, Henry (Michael Rooker). Unbeknownst to the siblings, Henry is a serial killer.

One night Becky and Henry bond over their shared childhood traumas – both were abused by their parents. Henry’s abuse was so bad that he eventually murdered his mother (although his stories about her murder are inconsistent, changing slightly each time he tells it). Henry further endears himself to Becky when he violently chastises Otis for touching her inappropriately.

One night, Otis takes Henry out on the town and they pick up a pair of prostitutes. Unable to control his homicidal urges, Henry kills both women in front of Otis. Henry tells Otis that the trick to getting away with murder is to use a different murder weapon each time, to attack random victims, and to move to a new place every few months. Although initially disturbed by Henry, Otis soon joins him in a murder spree. The pair kill a TV salesman in order to steal his technology, lure an innocent good samaritan to a fatal ambush, and violently attack, abuse, and kill a random family. Although Henry is disciplined in his killings, Otis gets more erratic and depraved with each murder.

Becky eventually decides to return home after she learns her husband has been imprisoned for murder. She goes on a date with Henry and asks him to accompany her home. She starts seducing Henry (who is clearly uncomfortable with her affection) when they are interrupted by Otis. Henry goes out to get fresh air and calm himself from the encounter. When he returns to the apartment, he finds Otis raping Becky. The men begin fighting, but with Becky’s help, Henry is able to kill Otis. Henry carves up Otis’ body and the pair dumps his remains into a river. They leave town, with Becky saying she loves Henry (and he begrudgingly says he loves her in return). The pair stop at a motel, with Henry promising to go on the lam with Becky.

The next morning, Henry leaves the motel room by himself. He drives out to the country and pulls over in a secluded area. He goes to the trunk and pulls out Becky’s suitcase, which is streaked with blood (it’s heavily implied her body is inside). Henry dumps the suitcase in a ditch before continuing on down the road. 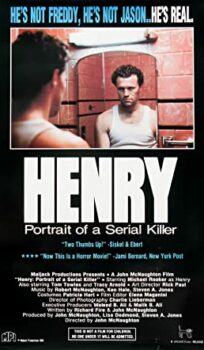