Henry V (Kenneth Brannagh) wins the war, but the French prince, angry at their impending loss, leads a charge behind their lines – killing many of the unarmed boys at the camp, including the page boy (Christian Bale).  Furious at this breach of conduct, Henry carries his body across the battlefield himself to have him buried.

After the battle, the French concede and the contested lands are once more agreed to be England’s.  In order to ensure peace, Henry is adopted by the French king and agrees to marry the French princess (Emma Thompson). 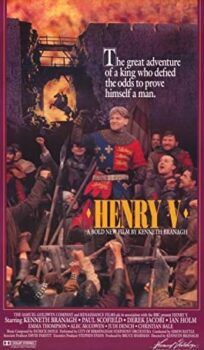