Henry (Keanu Reeves) & Max (James Caan) discover the tunnel that leads from the theatre to the bank. Both become involved in the play, with Henry taking a leading role, so they can have access to the room where the tunnel is. They bring in Joe, his ex-wife’s new husband, as muscle after his scheme selling Korean kitchen ware fell through.

Frank the guard who caught Henry three years before figures out what Henry, Max and Joe are doing and wants in. He is due to retire soon from a bank whose employers denied him a crucial loan he needed to pay for her medical bills and subsequently had to fund with their retirement fund prior to her death. He reveals that the vault is normally empty except on one night when all the cash from the armoured cars is delivered. Only it is the same night as opening night for the play.

Eddie Vibes (Fisher Stevens) who was in part responsible for Henry ending up in prison becomes involved in the bank heist, since he claims he is the only one who has the equipment to get into the vault.

On opening night, they manage to break into the vault after the delivery Eddie tries double crossing them, and in the ensuring struggle, Henry is shot in the leg. Once Eddie is subdued and left in the tunnel, All three flee to Florida, but Henry decides to stay behind, as it was never about getting rich for him. He returns to the still performed play and finishes his part with Julie (Vera Farmiga) who he has fallen for. 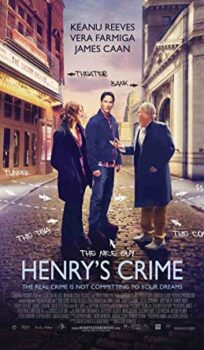