Hercules is tricked by Hades into giving up his powers for 24 hours to save Megara from harm. It’s only after this that he learns that Megara sold her soul to Hades years ago and was working for him all along.”Hercules” (1997)

With the planets in alignment and Hercules out of the way, Hades unleashes the Titans and the Cyclops from their prison, sending the former to attack Mount Olympus and the latter to attack Thebes. Megara begs Phil for help to encourage Hercules to fight the Cyclops, and without his strength but with their support manages to kill it – but Megara is crushed by a falling pillar during the melee. Because she was harmed, Hercules regains his powers and rescues Zeus and the other gods from the Titans, which he flings into obliviion.

Megara dies, and the heartbroken Hercules descends into the underworld, where Hades dares him to retrieve her soul from a whirlpool of same – as he likely will die before he reaches her. But braving death to save her is what finally makes him a true hero, so he regains his immortality, brings out her soul, and delivers a punch to Hades that sends him into the pool instead.

Hercules and the restored Megara are spirited to Mount Olympus but he decides that his love for Megara is worth more than immortality, so he returns to Earth with her; Zeus instead immortalizes his son as a constellation in the sky.

(At the close of the end credits, we hear Hades – who after all cannot die – asking if anyone is still around in the theatre.) 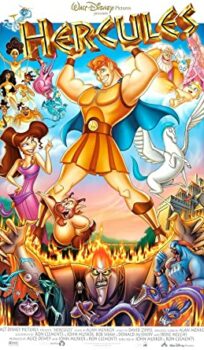