SHORT VERSION:
In an effort to drum up support for the unpopular mayor, his entourage finds and hires Steve to foil a staged armed robbery on board a train ostensibly to “Keep people’s hopes alive”. They later throw a Captain Avenger Day event for him at city hall and give him a key to the city, after which they show pictures of the mayor alongside the images of Captain Avenger, and Steve understands what they truly hired him for. Just then, reporter Gloria Preston – who had earlier figured out the heroics were staged – then appears and exposes Steve, and the crowd in attendance turns on him.

That night, he returns to his apartment and packs up to leave town. Jolene comes by and tries to tell him to not give up on her or his career and to try to be himself instead of relying on the Captain Avenger outfit to get people to listen to him, but his mind is made up. However, as he leaves, he spots a nearby apartment building on fire, and the fire department saves a woman on one of the higher floors but won’t go back in to save her son because of how dangerous the situation has become. Despite great risk to his life, Steve enters the building still dressed as Captain Avenger (but sans mask), and he finds and gets the boy out safely and manages to get himself out virtually unharmed as well. The people see Steve as a genuine hero, and Gloria – who is reporting on this story – understands that it doesn’t matter that Steve was the one who saved the boy; the fact that he saved him is what matters. Having witnessed Steve’s heroic act, Jolene comes up to him and tells him that she loves him. They then happily walk off together back to their apartment.

LONG VERSION:
Reeves (Bert Convy), who is in charge of public relations for Mayor Woodson (Leonard Harris), eventually figures out that Steve (John Ritter) is the one doing the heroics while disguised as Captain Avenger, so he has him come to his office for a meeting and lets him know that he knows of his acts of vigilantism. When Steve says that he wants to quit, Reeves replies that he will help him quit the right way, and suggests that they do a staged crime to “keep people’s hopes alive” and have him go out like a legend (though, in truth, he wants Steve to do it in the hopes of drumming up support for the mayor in the upcoming election, as he is unpopular). After some thought, he turns it down, due to how dishonest it is. However, after listening to a debate on TV that brings up points of how the people of New York love Captain Avenger, compounded with Jolene (Anne Archer) having earlier told him that she isn’t interested in going steady with him right now, Steve reluctantly takes Reeves’ offer. He is made to look like a hero again by foiling a staged armed robbery on an elevated train.

Guilt-ridden over what he has done, Steve tells Reeves that he’s officially quitting as Captain Avenger. Reeves informs him that the mayor is having a Captain Avenger Day event at city hall, so if he wants to end it, he should do it that day, and Steve agrees to appear. Meanwhile, reporter Gloria Preston (Jane Hallaren) analyzes the foiled train robbery and quickly comes to believe that the heroics were rehearsed, and after noticing that Captain Avenger made a quote at the scene that mirrored something Steve had said to her when she earlier interviewed him while he was doing a public appearance for the Captain Avenger movie, she deduces that Steve is the one under the mask and goes directly to city hall on Captain Avenger Day to confront him.

Steve takes the stand at the event and extolls the virtues that Captain Avenger stands for to the crowd, and he points out that there are heroes out there every day who don’t wear costumes or have comic book names. After being awarded the key to the city, he sees images of the mayor suddenly getting displayed next to the Captain Avenger images and understands what Reeves’ true intentions were for him. As he attempts to leave, Gloria appears, and she reveals his name to the crowd and tells everyone of his fake heroic act, and she has even found and brought along the actor who played the would-be robber. When asked by some people if what Gloria is accusing him of his true, Steve confesses that this particular act of heroism was staged. He tries to remind the people of what Captain Avenger stands for and that he himself is not important, no matter what they think of him, but the crowd angrily turns on him.

That night, Steve – watching from a hiding place – sees Jolene getting hounded by reporters outside their apartment building, and after she heads inside and the reporters go away, he goes into his apartment and starts packing up to leave the city, believing that his life here is ruined and that he has taken away all of the hope that he has given to the people. Jolene comes by and tries to tell him to not give up on her or his career and to try to be himself instead of relying on the Captain Avenger outfit to get people to listen to him, but his mind is made up. He wishes her well and leaves, and she chastises him for giving up.

As he walks down the street, he notices firefighters trying to put out a huge fire in a nearby apartment building. They save a woman inside, but they fail to find her young son, and due to the severity of the fire and the fear that the building may collapse, the fire chief won’t allow anyone back in to save him. Still wearing the superhero outfit (but sans mask), Steve sneaks into the building to rescue the boy just as Jolene shows up to witness the spectacle. Steve manages to find the boy and drops him out of a window into a safety net below, but before he can jump down himself, the fire hits a gas line and causes an explosion, and he disappears from sight. The fire chief and two bystanders go into the building to find Steve, and thankfully, they find him alive and virtually unharmed and get him out.

Steve hugs a relieved Jolene, and she tells him she loves him. The people present view Steve as a genuine hero, and Gloria, who was reporting on this story, decides that it doesn’t really matter that Steve was the one who saved the kid; the fact that he saved the kid is what matters. Steve and Jolene happily walk off together back to their apartment building. 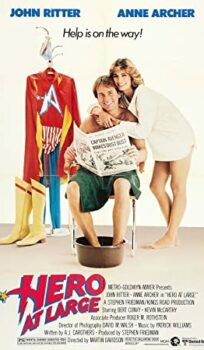