There are various story lines going on at the same time which can get confusing.

Here are the endings of each:

Gigi (Ginnifer Goodwin) and Alex (Justin Long) become a couple. Gigi mixes her signals and advances aggressively towards Alex. Alex turns her down. Gigi rants at Alex that he doesn’t put himself out there to be loved so he won’t find love as much as she will. He starts obsessing over this speech and finds that he’s turned into Gigi. He surprises her at her apartment and they decide to give a relationship a try.

Neil (Ben Affleck) proposes to Beth (Jennifer Aniston) by putting a ring in the pants she wants him to throw out. Even though Neil doesn’t want to get married he wants Beth to be happy so he’s willing to get married. You see their small wedding on his boat during the credits.

Mary (Drew Barrymore) and Conor (Kevin Connolly) become a couple. Mary sees Conor at a cafe. She decides to call him and they connect. She deletes her MySpace account. During the credits Mary says that she likes him but Conor mouths the L word.

Anna (Scarlett Johansson) ends up alone. She seems okay and is going to India with a friend on a yoga retreat.

Janine (Jennifer Connelly) divorces Ben (Bradley Cooper). The turning point was when a pack of cigarettes falls out of his clothes. She smashes a mirror of the wall. When Ben comes home he finds his clothes neatly stack and folded on the stairs. There is a full box of cigarettes with a note stating that he can enjoy the pack inside the notes states p.s. I want a divorce. At the end you see Janine put a new mirror on the wall of her new apartment. Ben is back in the supermarket where he met Anna. 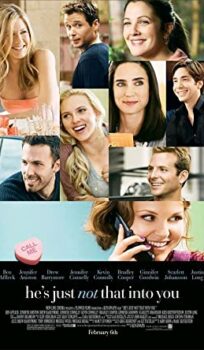