Monte (Robert Patterson) was sentenced to life in prison for the childhood murder of his friend who had killed his dog. He and other death row prisoners are sent on a scientific expedition to a black hole. The spaceship is travelling at 99% of the speed of light, meaning that time is passing much more quickly on Earth than on the ship; the prisoners cannot communicate with Earth and understand that they will never return home. The mission’s physician, Dibs (Juliette Binoche), is determined to create a child from the other prisoners using artificial insemination. She eventually succeeds by raping Monte and then using his semen to impregnate another prisoner while both are drugged.

The prisoners all die by radiation, suicide or murder until only Monte and the baby are left alive. Monte names the baby Willow and raises her. When she is a teenager they find a spaceship similar to theirs. Monte boards the ship but finds only dogs who are surviving by eating each other. Willow (Jessie Ross) pleads with him to bring aboard a puppy but he refuses, saying it could bring contamination.

Monte and Willow board a shuttle and fly directly into the black hole, where time and space are one. 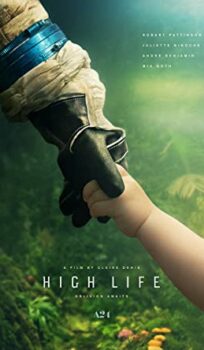