A mysterious Stranger (Clint Eastwood) rides into the lonesome town of Lago. No one recognizes him but it is implied that he is the physically reincarnated ghost of Marshall Jim Duncan, murdered by a gang of thugs as the cowardly citizens of Lago stood by at did nothing.

The vengeful Stranger arrives one year later and manipulates both the townsfolk and the thugs against each other. Many die and Lago is destroyed in the ensuing conflagration. As the Stranger rides out, the town dwarf is carving a tombstone for Duncan’s unmarked grave. The dwarf tells him that he never knew his name, to which the Stranger replies, “Yes you do.” Credits roll and the Stranger dematerializes before completely out of sight. 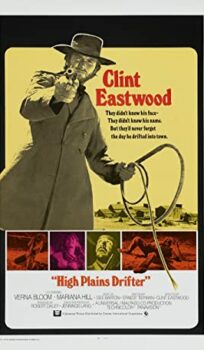