Gabriela decides to not come back from Stanford’s early freshman admission program effectively breaking up with Troy over the phone.  Troy drives to her on prom night to be with her, they dance again there’s a prom montage but they are clearly still at Stanford and not at the school with their friends. The night of the spring play Sharpay is the last to know Troy’s not there yet he and Gabriela are driving back from Stanford)and Rocketman is going on in his place. The scene between them goes pretty hilariously. After Sharpay runs off to her dressing room she learns her assistant Tiara (Jemma McKenzie-Brown) has been studying her the whole time to take her place. In the big Sharpay number Tiara goes on and Sharpay upstages her till the end when Ryan slowly lowers them through the floor. Troy and Gabriela finish the play in their roles.

As part of the play finale its announced that the one Julliard Scholarship that Troy, Sharpay, Ryan and Kelsi are all up for has been given to Kelsi and because he’s that good, Ryan. Taylor is announced as attending Yale, Gabriela is going to Stanford, Chad and Sharpay are both going to U of A, with Sharpay running the drama program at East High with Mrs. D.  and Troy announces he’s going to play basketball and study drama at Cal-Berkeley so he’ll be close to Gabriela. The movie ends with the real graduation and a musical number where the kids are back in their stage clothes when the curtain comes down. 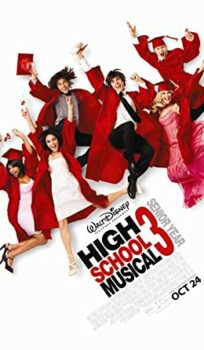