During the hotel heist, a night guard shows up unexpectedly, and Roy Earle (Humphrey Bogart) shoots and kills him. As the gang flees the police, Babe and Red (Alan Curtis, Arthur Kennedy) take a wrong turn and end up flipping their car and killing themselves, but Mendoza (Cornel Wilde) in the back seat survives. Roy attempts to deliver the jewels to Mac (Donald MacBride), who has unfortnuately died of natural causes while waiting for his prize. Roy continues with Mac’s back-up plan, but Kranmer (Barton MacLane) wants to take the jewels for himself. Another shoot-out ensues, leaving Kranmer dead and Roy wounded. After ‘Doc’ (Henry Hull) patches Roy up, Roy visits Velma (Joan Leslie) to say goodbye. Velma rejects him yet again, and he realizes that he should be returning Marie’s (Ida Lupino’s) devotion. While Roy waits impatiently for the fence to get his money for the jewels so he can return east, Mendoza fingers him, and a state-wide manhunt ensues. Roy puts Marie and Pard the dog on a bus to Las Vegas, promising to meet them after he’s paid. He is spotted by the authorities, and eventually trapped near the summit of Mount Whitney. Marie hears the news on the radio, and rushes to the mountain, only to be captured herself. Pard gets away, and runs up the mountain to Roy. When Roy hears Pard barking, he realizes that Marie is near, and steps out to call her, leaving his back open to the police sniper who shoots him. The ‘curse of Pard’ holds true as the dog approaches Roy’s corpse, whimpering. 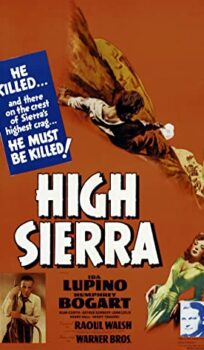